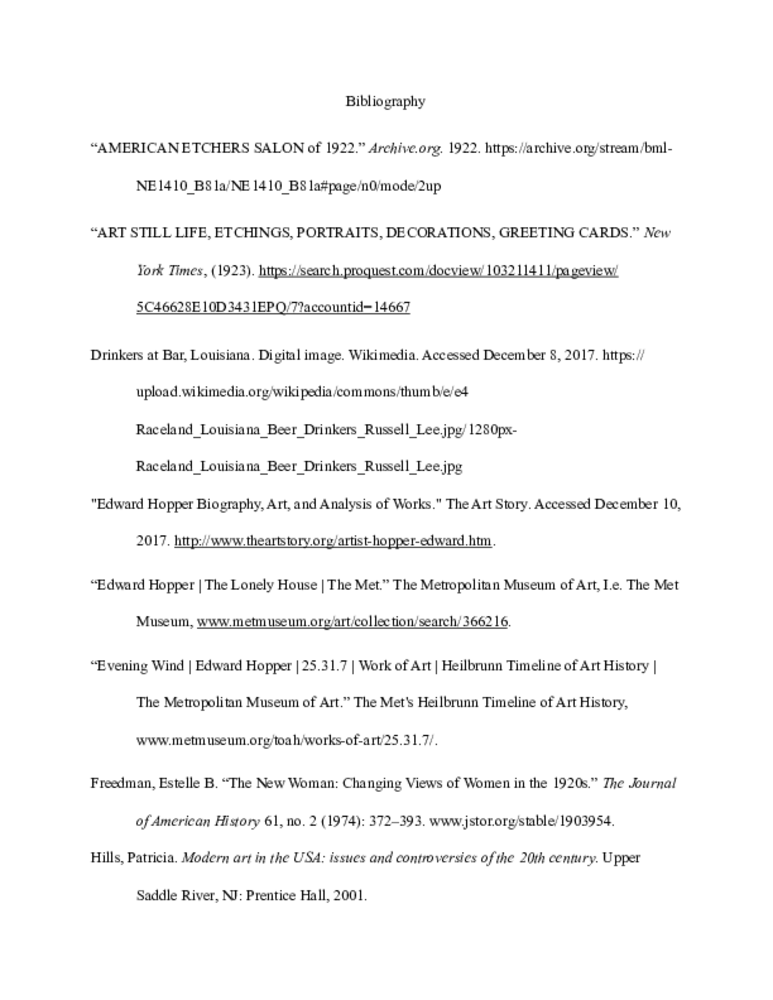 wide reaching influence of American artists of the time. He aims to argue that Sloan and his

associates were the first important, completely American art movement, yet they were still

deeply influenced by European traditions. He looks at various Sloan pieces to identify how it

nations. Written for other artists and art historians, it gives a lot of insight into the works of the

art. It is a good resource of Hopper’s thoughts on art and various American artists, but his

argument seems to be pretty obvious, especially considering that nearly all American artists at

The purpose of Levin’s book is to provide an in depth summary of Edward Hopper’s life and the art that he created during the different time periods in his life. Not only does this book provide an immense amount of information regarding his family, but it provides issues that Hopper faced throughout his life and gives specific details about his experience with different mediums of art and how he was influenced during these times. With over 35 sections in Levin’s book, the information one can find spans from his struggle to paint, his reactions to the war, and even his anxiety and illnesses. Since this book is factual, there are no biases and even provides a wide array of other helpful sources within the book as well. With such a wide variety of topics to explore, this book is no doubt a useful asset to anyone completing a project on Edward Hopper, or simply someone with an interest of Hopper and his art.

The purpose of “Alcohol in America” is to give a brief history of alcohol consumption in America, and to provide a clear link between alcohol and politics. Starting in the 18th century with the new settlers in America, and ending in the 90s, Rorabaugh explains the attitude shift over the course of a few hundred years. The attitude and acceptance of alcohol has changed several times and was more “respected” in the 1700s than it is now. Depending on the context surrounding the issue, alcohol was either something one could openly enjoy in a social environment, or it led to a prohibition. In regards to Hopper’s Eastside Interior and the context around the era, alcohol served a pivotal role in the 1920s due to the prohibition and its importance to the sociopolitical scene. This piece provides a very clear and detailed history of alcohol consumption and how various groups, like the Quakers or the Women’s Crusade felt about the subject. Rather than choosing to be against or support alcohol, the author gives a timeline of events without showing much bias. The author concludes by saying that opinions toward the subject are constantly changing and will continue to do so.

This is a great book for anyone wanting to learn about Edward Hopper’s life and works. This

book is a biography chronicling Hopper’s life and career from birth until death, working through

the different phases of his life and career. The book is actually fairly short, and the prose is not

difficult, so most interested people should have no problem reading it. I was able to find just

needed in this book, so it was a great base for my research and would probably serve anyone