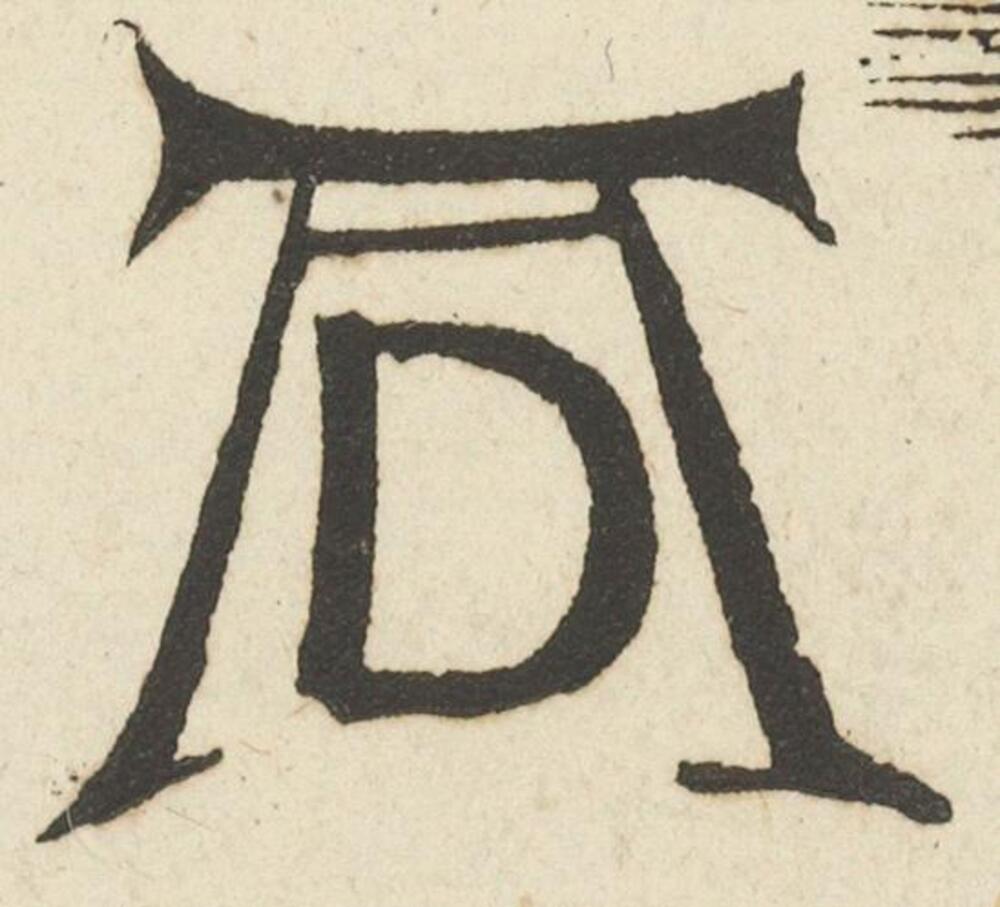 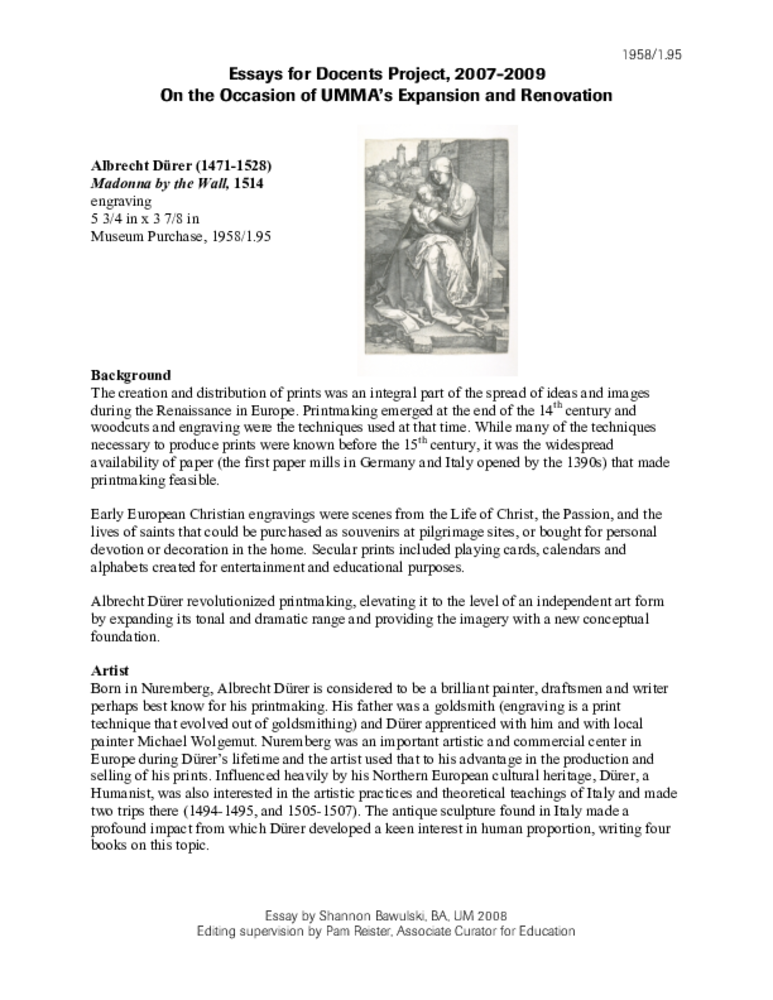 Background
The creation and distribution of prints was an integral part of the spread of ideas and images during the Renaissance in Europe. Printmaking emerged at the end of the 14th century and woodcuts and engraving were the techniques used at that time. While many of the techniques necessary to produce prints were known before the 15th century, it was the widespread availability of paper (the first paper mills in Germany and Italy opened by the 1390s) that made printmaking feasible.

Early European Christian engravings were scenes from the Life of Christ, the Passion, and the lives of saints that could be purchased as souvenirs at pilgrimage sites, or bought for personal devotion or decoration in the home. Secular prints included playing cards, calendars and alphabets created for entertainment and educational purposes.

Albrecht Dürer revolutionized printmaking, elevating it to the level of an independent art form by expanding its tonal and dramatic range and providing the imagery with a new conceptual foundation.

Artist
Born in Nuremberg, Albrecht Dürer is considered to be a brilliant painter, draftsmen and writer perhaps best know for his printmaking. His father was a goldsmith (engraving is a print technique that evolved out of goldsmithing) and Dürer apprenticed with him and with local painter Michael Wolgemut. Nuremberg was an important artistic and commercial center in Europe during Dürer’s lifetime and the artist used that to his advantage in the production and selling of his prints. Influenced heavily by his Northern European cultural heritage, Dürer, a Humanist, was also interested in the artistic practices and theoretical teachings of Italy and made two trips there (1494-1495, and 1505-1507). The antique sculpture found in Italy made a profound impact from which Dürer developed a keen interest in human proportion, writing four books on this topic.

Dürer was a pioneer in many respects. His self-portraits influenced many artists. The watercolors he painted while abroad were some of the first depictions of landscape without traditional Christian iconography. The rich detail (a tradition of northern painting) and use of perspective (from Italian Renaissance painting) were also significant features of his work. He was regarded by his contemporaries as a second “Apelles,” the famous painter from antiquity. Much of Dürer’s work still survives—including 350 woodcuts and prints, 60 paintings and over 1000 drawings and watercolors—allowing modern viewers to comprehend the reasons for his fame.

Like many other engravers, Dürer used a monogram comgining the initials of his name. His is perhaps one of the most recognizable signatures to date.

Object Information
UMMA’s Madonna by the Wall is an example of a print made during Dürer’s service for Emperor Maximilian I.

Majestic yet humble, the Virgin Mary is shown seated before a city wall with the Christ Child on her lap. Her voluminous drapery and her enthroned pose make her seem regal, yet the purse and bunch of keys attached to her belt are attributes of the typical housewife. Enveloped in a silken mantle, which she wraps around the infant, she gazes tenderly at him, holding him protectively. He grasps an apple, referring to the fruit of the Tree of Knowledge and his future role as redeemer of mankind from sin. The print has a silvery tonality, created with fine and delicately engraved lines. Hatching, cross-hatching, and stippling create the impression of contrasting materials and the shimmer of light and shadow over forms.

The buildings in the background are those of the Kaiserburg of Nuremberg as seen from a window of Dürer’s house. By using his own city as a backdrop, the artist made the image one with which the average person could identify and brought the spiritual into the realm of the everyday.
---Gallery label text by Curator Annette Dixon, April 2002

Dürer’s precise cross-hatching and stippling create the impressions of contrasting materials along with the shimmer of light and shadow over the forms.

Images like this of the Virgin Mary were very common in the fifteenth and sixteenth century and most likely were inspired by the numerous panel paintings of the same subject. Mary was often shown on the ground, which reminds the viewer of the rest of the Holy Family on their flight into Egypt. The increased production of these prints, particularly those showing a young Mary, was a result of the increase of Marian worship in Europe during this time.

Technique
Engraving is an intaglio (cut or incised) print process as opposed to a relief process in which the raised area of a plate carries the ink. In engraving, the lines cut into a metal plate are filled with ink, the surface of the plate is wiped clean, and the dampened paper is pressed against the plate with such pressure that it is forced into the grooves and picks up the ink.

Engraving begins with a drawing. The image is first drawn on paper and then transferred from the paper to the plate by rubbing the verso of the drawing with chalk. A tool is used to retrace the outlines of the drawing, transferring the original image on the plate. Copper is the preferred type of plate because it has the ability to be easily incised and strong enough to withstand the pressure of the press.

After the image is transferred, engraving can begin. Specific engraving tools are required, most notably the burin, a steel shaft with a square or lozenge shape at the sharp end and a round wooden handle. The engraver holds this tool in the palm of his hand, low to the plate, and cuts straight ahead while turning the plate against the burin as the line curves. The burin can create a range of lines from delicate to wide. Other tools, used to produce a variety of tones and textures include stipple gravers, roulettes, mattoirs, and mezzotint rockers.

After the image is engraved on the plate it is inked. Inks are prepared from well-ground pigments worked into a reduced linseed oil until the mixture is stiff and saturated with pigment. To ink the plate’s surface an inking ball made of leather or something called a poupeé (a cylinder of tightly wound felt) was used (now a roller or brayer is used). Then a cloth is used to wipe the excess ink from the surface. The process of wiping was finished with the heel of the artist’s hand which could have whiting (calcium carbonate) on it.

The paper is important as it influences the appearance of the finished print. The paper must be able to be soaked or dampened to relax the fibers and be strong enough to handle the pressure of the press without tearing.