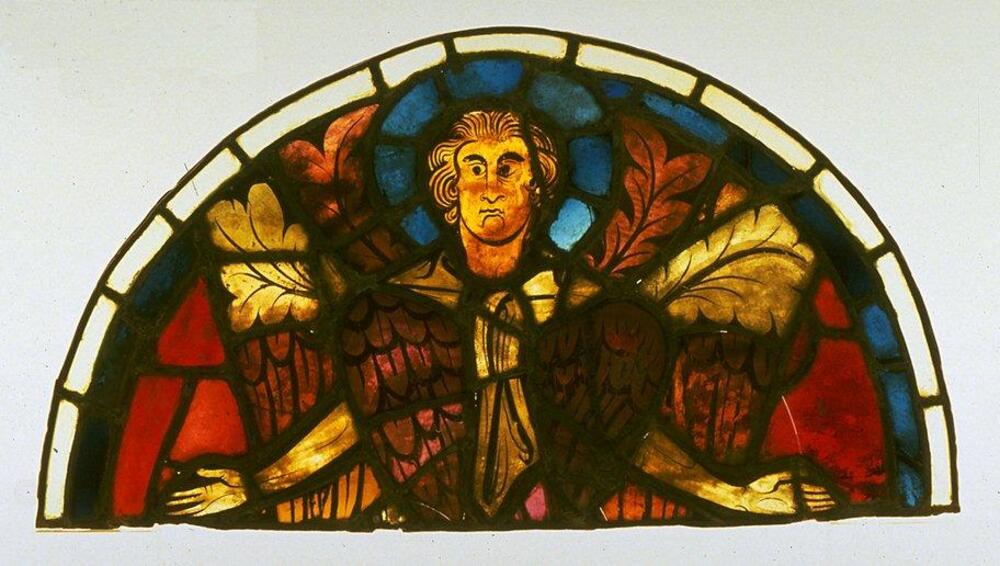 Background
The Cathedral: This stained glass panel depicting an angel is from the west rose window of Notre de Dame de Reims Cathedral, France. Reims played important roles in medieval France. Along with being a seat of an archbishop it was also the location of the coronation of the French kings. This cathedral was one of the first monuments registered as a UNESCO World Heritage Site and in 2011 celebrated its 800th birthday.

Gothic Stained Glass: The basic technique for making colored glass has been known since ancient Egypt. Sand, ash and metallic oxides are combined and fused at a high temperature. Stained glass was used on a small scale in early Christian architecture in Europe but it reached its height as an art form in the Gothic era in part due to the enthusiasm and writing of Abbot Suger of the abbey church of St. Denis, Paris. Suger wrote extensively on the construction of the new St. Denis, an important example of early Gothic architecture in which stained glass was a significant symbolic feature. He wrote “The dull mind rises to truth through that which is material and, in seeing this light, is resurrected from its former subversion” [in Stokstad, Art History, 4th edition, p. 493]. For Suger, the ability of the material object (stained glass) to lift the dull mind towards that which is immaterial, makes it an integral part of a religious experience.

How was this window separated from the church? The west rose window has required repair at several points. It is possible that UMMA’s window may have remained in the repair shop after restorations to the west rose needed after a hailstorm of 1886 (repair work done between 1906 and 1909). Damage in 1914 from a German firebomb caused glass to fall to the pavement, some being taken away. Restoration in 1925 was yet another time when UMMA’s piece may have left the cathedral. The Getty Museum owns a similar panel. 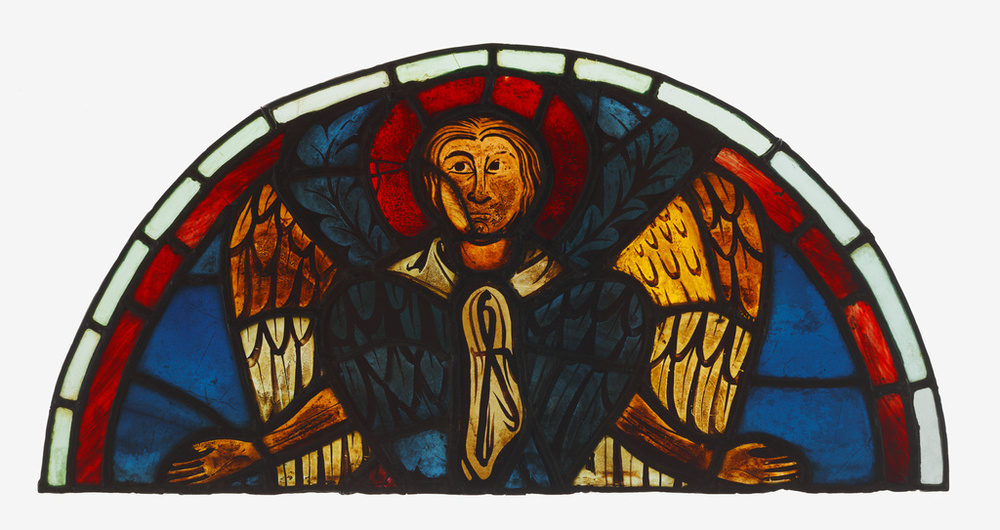 Artist
The artists who created the windows at Reims are unknown. Like other parts of a Gothic cathedral such as the masonry, anonymous members of a guild created the stained glass.

Object Information
The subject of the rose window to which UMMA’s panel belonged is the Virgin, to whom the cathedral is dedicated. 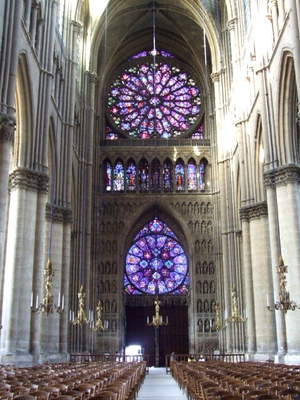 Download
Image
As you can see in the picture at right, the west portal at Reims contains two rose windows. The upper rose is the original location for UMMA’s panel. The window is divided into twelve compartments with forty-eight medallions arranged in three layers. These parts radiate from a central medallion which shows the Assumption of the Virgin. The first tier of medallions contains the twelve apostles who witnessed the miracle. The second tier has the twenty-four angels who attended the Virgin’s glorification. Some of these angels—including UMMA’s—are depicted as seraphim, fiery six-winged beings that stood closest to God and were the highest order of angel. Only four wings of this seraph are visible as his lower extremities were contained in the bottom half of the medallion. The last tier shows a variety of iconography.

The angel is shown with it’s arms outstretched with one pair of deep yellow wings emerging behind him while another purple set is crossed in front of him with a knotted, white cloth that falls to the center of his chest. The angel’s face and hair are both light brown with a dark blue halo surrounding them. All of this is set against a background of red with a dark blue border: the two colors most representative of French Gothic stained glass.

Similar facial and drapery characteristics have been found in other figures from the same rose window and the panels distinct painting style suggests that it was executed towards the end of the 13th century. Between the top of the angels wings and its head are four leaves/branches. These are bits of medieval glass unrelated to the original, used to fill areas of missing glass. The iconography of Reims cathedral also affirms the divine dimension of the monarchy. This message is repeatedly conveyed in sculpture around the cathedral: the Crowning of the Virgin on the central portal; the Galleries of Kings in two locations; and the scenes of the lives and coronations of Biblical kings on the archivolts of the great rose window.

Technique
Glass-blowing: The technique of creating stained glass has a long tradition. The twelfth century German monk Theophilus describes the process in his text On Diverse Arts. The time and care required for the entire process can be gleaned from his description of the very first step, creating ash, one of the component ingredients.

If you have the intention of making glass, first cut many beechwood logs and dry them out. Then burn them all together in a clean place and carefully collect the ashes, taking care that you do not mix any earth or stones with them.

His treatise includes similar detail for gathering sand and creating the clay pots in which glass and metallic oxides were mixed together and melted in the furnace to create diverse colors called, not surprisingly, pot-metal glass. The colors of twelfth-century glass—mainly reds made with manganese, and blues made with cobalt, with touches of dark green, brown and orangey- yellow—were so dark as to be nearly opaque. These deep colors gave gothic windows a saturated and mysterious brilliance.

Although the glass made for windows is flat, it is first pulled from the furnace on a pipe and blown as vessels are. Molten glass could be blown into a sausage shape, then slit on the side before being flattened into a sheet. It could also be spun with a pointil iron into a round sheet, or crown. Painters added details—such as the face and feathers on UMMA’s seraph—with enamel emulsion or vitreous paint and the glass was reheated to fuse the enamel to it.

Window construction: To create a window, a designer would make a small, preliminary, colored drawing of the window. After this was completed the window aperture where the stained glass was to be placed was precisely measured and a full-sized drawing called a cartoon was created on a white board, or table on which the glass would be directly cut.

To assemble the window, pieces of colored and painted glass are laid out on the design board with the edges of each fit together like a jigsaw puzzle. These pieces are fitted into H-shaped strips of lead called cames. Lead was ideal because it was weatherproof and durable but flexible enough to be molded around the glass. The lead joints were soldered using an iron heated from a furnace. Finally, the window had to be weatherproofed and stabilized. Putty was inserted between the glass and the lead cames for waterproofing and the entire composition then stabilized with an iron frame (armature) and mounted in the window. 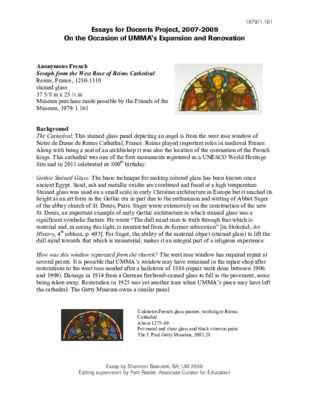