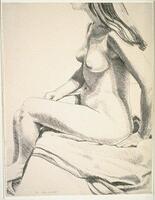 Title
Before the Mirror

Label copy
In a rapidly changing Germany, women, especially young women, wrestled with the new roles that modern life made available to them and the old roles still expected of them. Erich Heckel’s Before the Mirror depicts a scene that became a pervasive and powerful image of the “new woman” in German culture during the twenties. The introspective woman before the mirror appears in numerous graphic works and films of that time.
Released from the confines of domesticity by the war, during which demand for labor created a large female workforce, and by the opportunities to engage in city life and its entertainments, the young independent woman was an icon of modern Germany. The image of the free "new woman” was, however, more myth than reality. The new roles available to women were not carefree, and even when women embraced their new positions, they found themselves juggling their new obligations with the established roles of wife and mother.
Text written by Katharine A. Weiss, Exhibitions Assistant, on the occasion of the UMMA exhibition Graphic Visions: German Expressionist Prints and Drawings, January 25–April 6, 2003, West Gallery