Study for 'Image in Xhorkom' 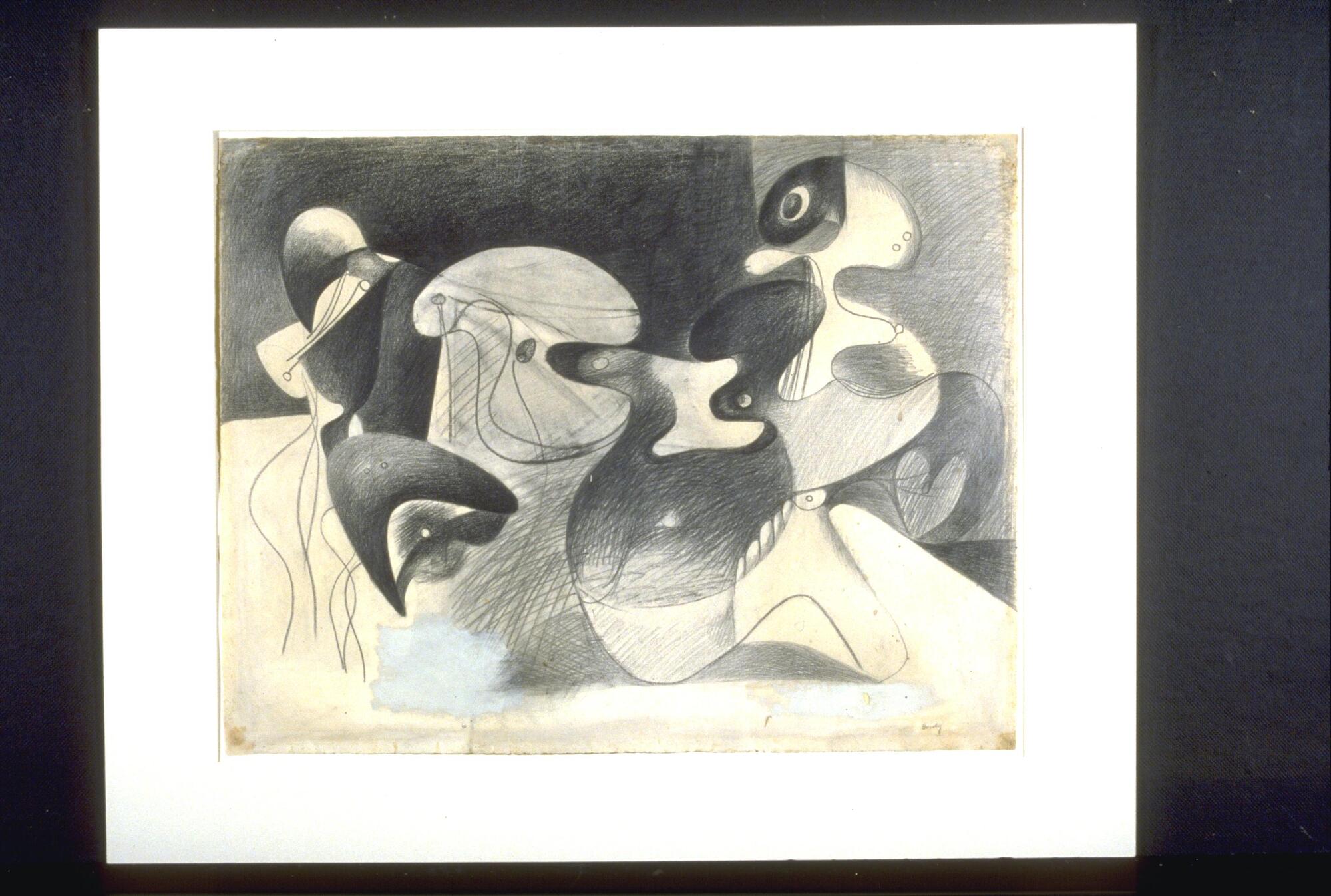 Title
Study for 'Image in Xhorkom'

Label copy
Arshile Gorky (Vosdanik Manuk Adoian) was one of a group of young artists in New York City during the 1930s and 40s who brought a new vitality to European Surrealism, an important influence on the New York School. Gorky studied drawing in his native Armenia before he and his family were forced to flee during the Turkish interventions of World War I. In 1920, after several years of hardship, he and his sister Vartoosh secured passage to the United States; by 1924, Gorky was established in New York, pursuing a career as a painter and poet. This work is one of several studies for a painting created in 1936. The title derives from a variant spelling of Khorkom, the Armenian village in which the artist was born and spent his early childhood.
In this study, the influence of Surrealism in general and Miró and Picasso in particular is readily apparent, from which Gorky developed his own personal stylistic vocabulary of curvilinear, biomorphic forms, which he employed to different expressive ends. Here the rounded organic forms suggest referents in the natural world, although they remain elusive. The space remains ambiguous as well, and a sense of mystery pervades the work. Much of Gorky's work has been linked to his memories of his Armenian childhood, something he often mentioned. The forms in this particular composition seem to evoke figures belonging to another world, one that no longer exists except in memory.
Sean M. Ulmer, University Curator of Modern and Contemporary Art, on the occasion of the exhibition The New York School: Abstract Expressionism and Beyond, July 20, 2002 – January 19, 2003
The word "Xhorkom" derives from Khorkom, the Armenian village where Gorky was born. This is one of three drawings that relate to three paintings having to do with the village. The interlocking shapes are multi-referential: bird, leaf, artist’s palette, eye, female body, phallus. The forms are concrete though generalized, as in a dream. This work was acquired by Florence L. Stol, who knew Gorky, among other contemporary artists, before he was well known.
Label copy from exhibition "Dreamscapes: The Surrealist Impulse," August 22 - October 25, 1998

Subject matter
Xhorkom is the village in Turkish Armenia in which the artist grew up before the Armenian genocide during World War I. The piece uses abstract, organic forms to evoke the happy, nurturing, cradling experience of his childhood with his family and to express,the indeterminate, changing, and fantastical shape of memory.

Physical Description
Black and white drawing of organic forms vaguely resembling human figures flowing into one another in a room-like space. On the right hand side of the grouping stands the most recognizably humanoid figure.