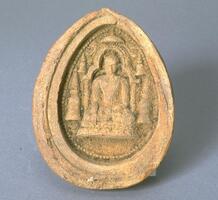 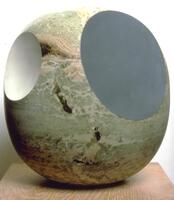 Label copy
German artist Ernst Wilhelm Nay was among those creating what the Nazis labeled "degenerate art," and his paintings were removed from public exhibition. In 1940, Nay was called to serve in the German military. He was imprisoned by the Americans during the war and was released in 1945. In 1949 Nay, along with other "degenerate" artists such as Fritz Winter, created Zen 49, a group that defended the practice of abstract art.
In 1955, Nay began a series of paintings that brought him international renown. Early versions of these works, known as the Disk Pictures, feature circles that were intended to appear as though they were a result of the movement of the brush itself, that invention sprang directly from the act of painting. Nay saw these simple forms, with their arithmetical basis, as spiritual symbols and expressions of elemental forces. Abstract Composition displays the rhythmic arrangement of spiral forms that he tried to achieve in the Disc Pictures. Not usually considered part of the New York School in strict terms, Nay was an important figure in the propagation of the Abstract Expressionist style in Germany and in Europe.
Jamina Ramírez, Intern for Modern and Contemporary Art, on the occasion of the exhibition The New York School: Abstract Expressionism and Beyond, July 20, 2002 – January 19, 2002