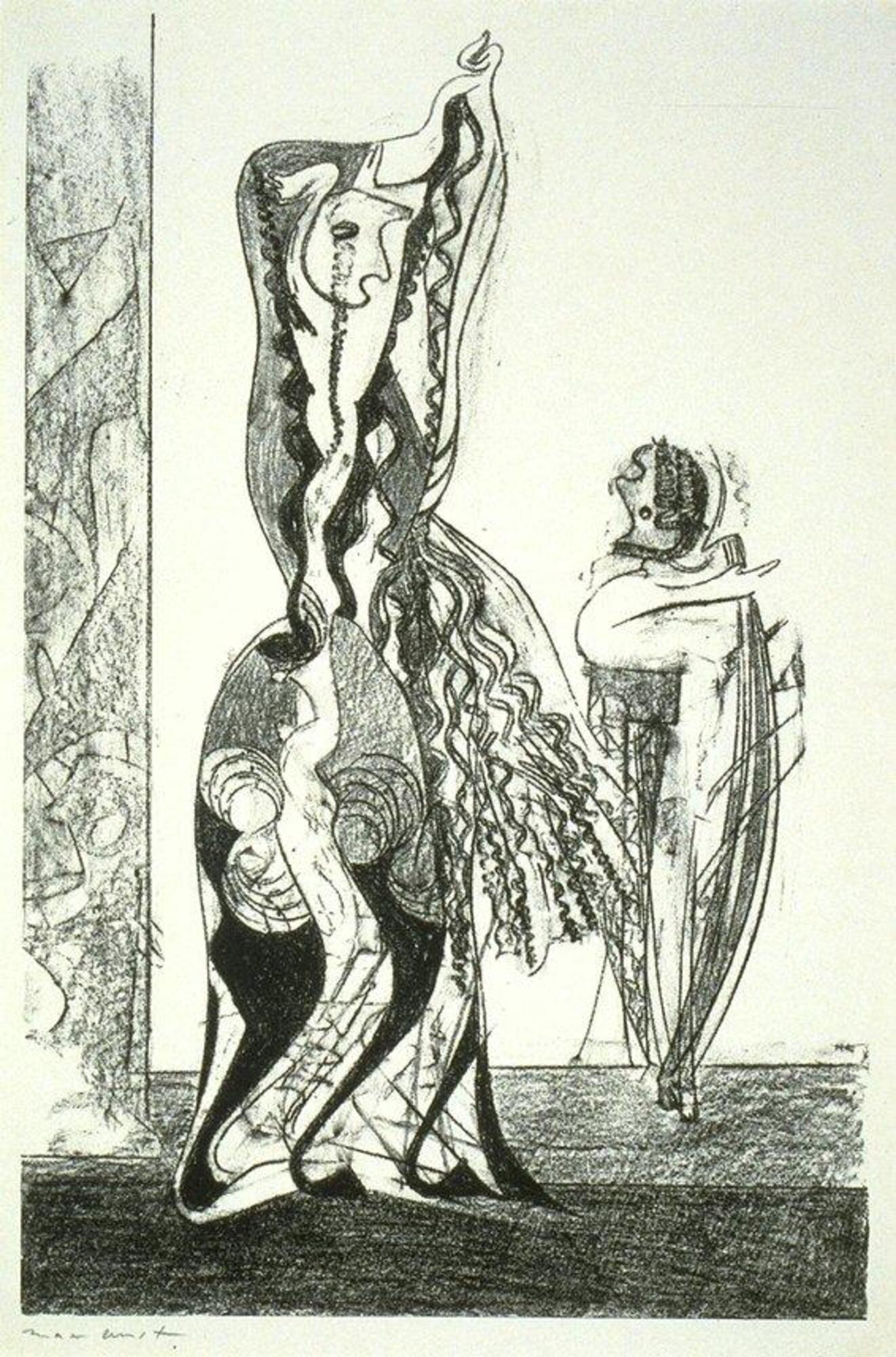 Label copy
Ernst produced several lithographs in 1950 working in collaboration with the well-known Desjobert Atelier in Paris. Most of those lithographs were color prints, but this work, printed on Arches paper, uses black ink. Some of the principal techniques and interests in Ernst’s imagery can be found in this print depicting two dancers. The two figures, quite disparate in scale, stand within a loosely defined space as they perform a spirited dance, possibly Spanish in origin. The sinuous, undulating lines of the female dancer in the foreground suggest movement; in contrast, the compact form of the other dancer seems to occupy a fixed point. Evident in both figures, as well as the wall or border at the left, is Ernst’s use of frottage in his work. As can be seen in many of Ernst’s prints and collages, he often incorporates patterns derived from fabric and other textures, placing them under his lithographic transfer paper. Rubbing the pattern from below into portions of his image contributes a variety of textural and tonal effects that drawing alone could not produce.
Label copy from exhibition "Dreamscapes: The Surrealist Impulse," August 22 - October 25, 1998

Subject matter
This print represents two dancing women, a motif Ernst would explore for several years.  In 1946, Ernst had settled in Sedona, Arizona where he was deeply interested in and inspired by Native American art and culture, a theme common among many of the surrealists of the time.  This could be Ernst's interpretation of Hopi dances, such as the Hopi rain dance, which Ernst observed many times during his stay in Arizona.  In the following year, Ernst would go on to create an expansive series of works in several mediums to explore his fascination with Native American dance and culture.

Physical Description
Two abstract figures stand in the central portion of this image.  The figure on the left is much larger than the figure on the right.  The left figure looks toward the right, raising their arms into the air.  They wear a dress that has patterns of waving forms and squiggled lines.  The other figure bends one arm under their chin and has an outfit depicted with lines that curve to right. The background in mostly blank, except for a strip of patterned grey along the left side of the work. The figures stand on a band of black and grey ground.