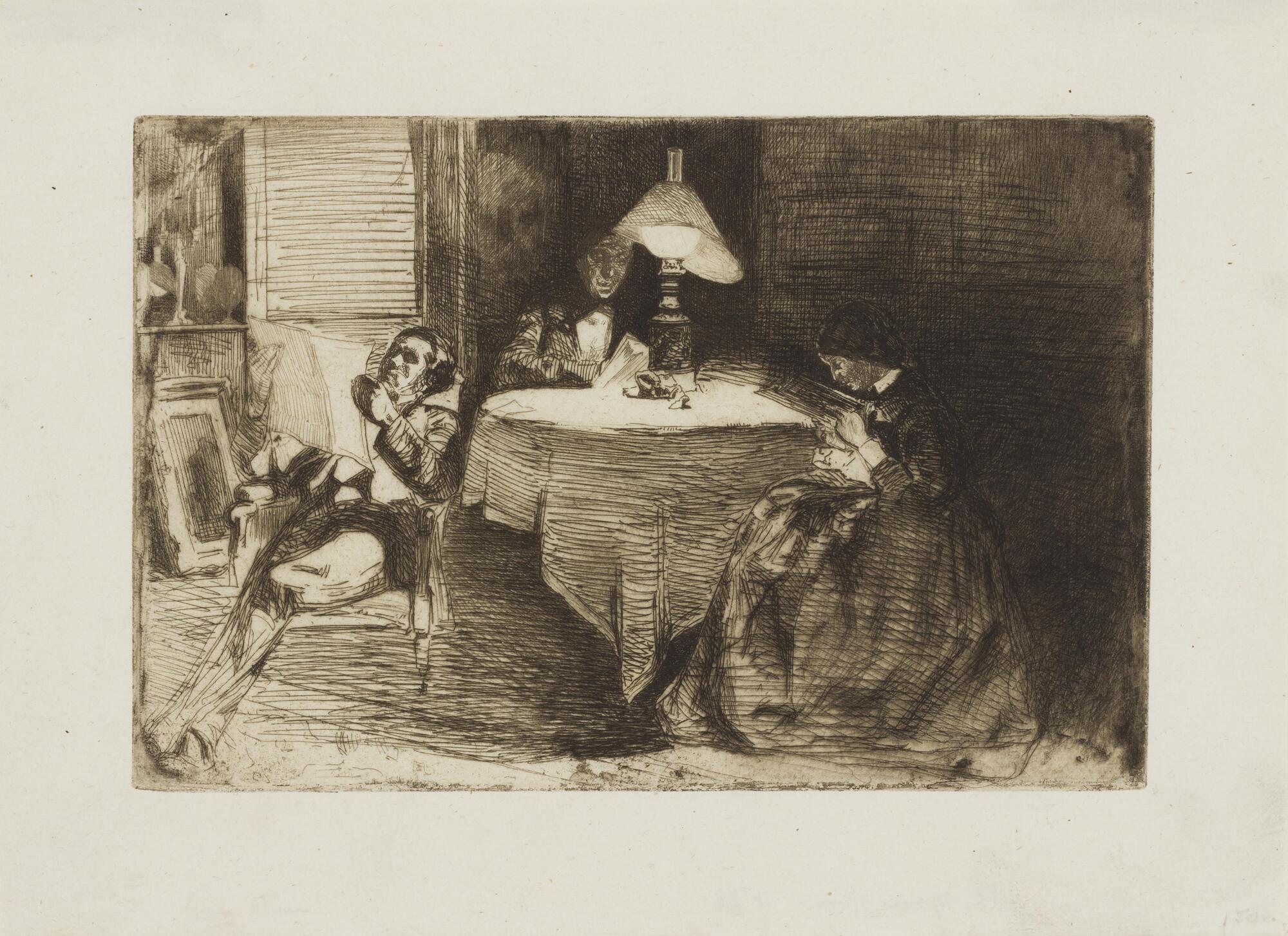 Label copy
The Music Room
1858
Etching
Second state of two (Kennedy 33)
Bequest of Margaret Watson Parker, 1954/1.334
In the late 1850s, Whistler spent time in London with his half-sister, Deborah Haden, and her family, producing many scenes of domestic life as well as portraits of the Haden family. The Music Room shows the family at home, with Deborah, her husband Seymour, and Seymour’s medical partner James Reeves Traer (Whistler’s doctor and good friend) grouped companionably around a table, reading by lamplight.
Whistler’s friendship with Seymour Haden did not last. First the strain of competition between the two men entered the relationship, as Haden received increased recognition of his prints in the British art world, while Whistler, the younger and more gifted artist, did not. Then, in 1867, during a medical convention in Paris attended by both Traer and Haden, Traer unexpectedly and suddenly died, and Haden decided to have him buried in France. When Whistler angrily confronted Haden about this peremptory decision, the argument ended with his pushing his brother-in-law through a plate-glass window. The two men never spoke again, and Deborah Haden was forbidden to see her brothers or stepmother. With some contrivance, they were occasionally able to meet at the homes of common friends.

Subject matter
As a young man, Whistler spent time living with the family of his half-sister, Deborah. Her husband, Francis Seymour Haden, was a physician and amateur printmaker and print collector; it was from Haden that Whistler learned the finer points of the etching technique--both from studying Haden's personal collections as well as from etching alongside his brother-in-law. Haden is seen to the left; at the back of the table was Haden's medical partner (and Whistler's own physician and friend), James Reeves Traer.

Physical Description
Three figures, two men and a woman, are seen seated around a round table with a lamp; all are engaged in reading in the pool of light provided by the lamp. The rest of the interior is fairly dark, particularly in the portion of the room behind the lamp. The man at the back of the table is shown roughly face-on; the man to the left is leaning back with his legs stretched out in front of him; the woman is closest to the viewer, shown in profile, holding her book fairly close to her face.