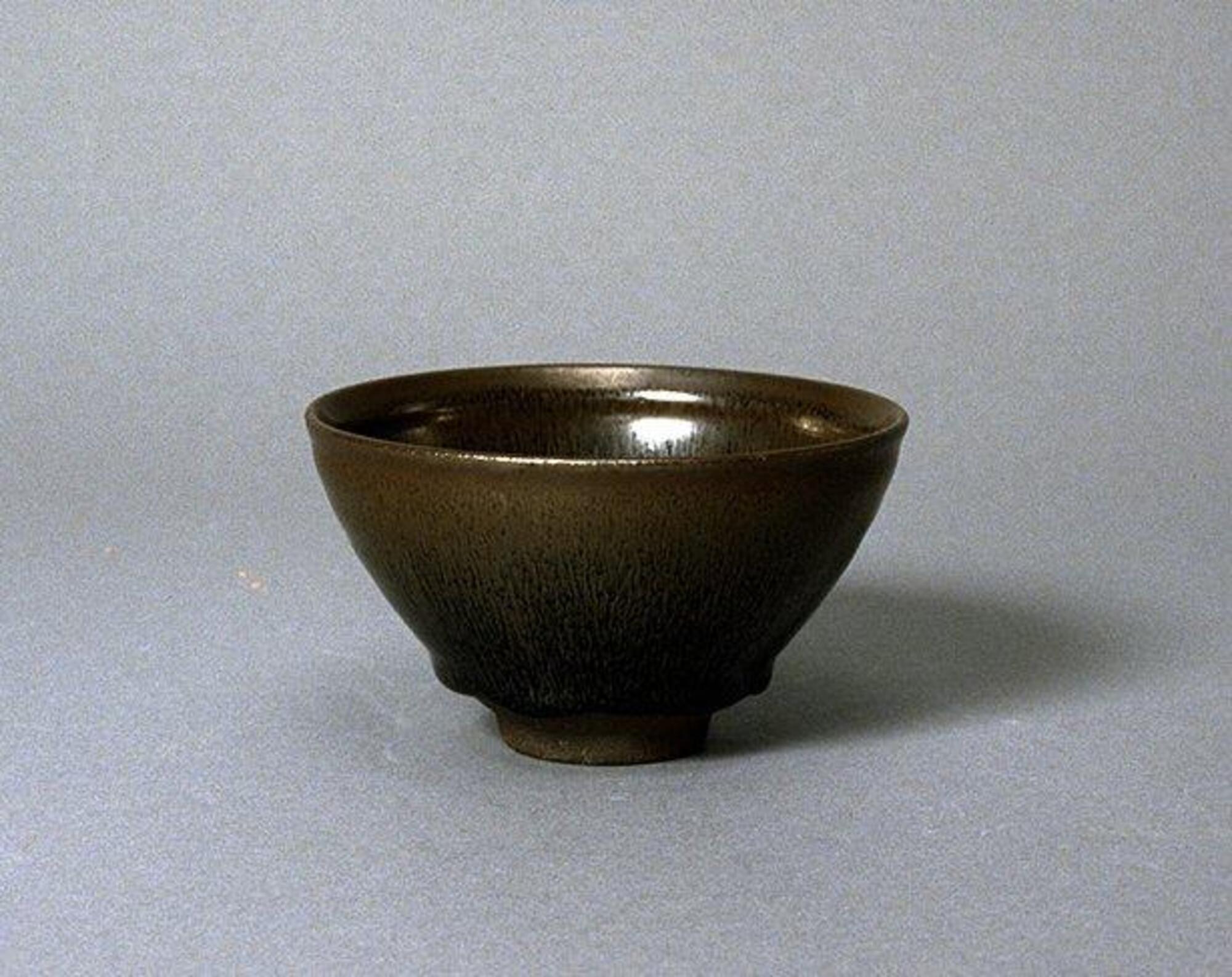 As early as the Tang dynasty (618-907), the area of today’s Fujian province was famous for its tea production.  Naturally, the kilns in that region specialized in tea wares, both provincial and for the court.  During the Song dynasty, a cluster of kilns known as the Jian kilns became famous for their sole production of dark, iron-rich glazed stoneware teabowls. These bowls not only kept tea warm, but their dark glazes created an aesthetically pleasing contrast against the thick, milk-white whipped tea that was customary to drink during the Song.

A variety of controlled kiln “accidents” during the firing, to temperatures up to 1,300 degrees Celsius, allowed for the crystallization of iron to create a variety of iridescent, spotted, and streaking effects, known as “oil spot,” “partridge-feather,” and, most famous of all, “hare’s fur” glazes.  Aesthete Song Emperor Huizong (r.1101-1125), in his Da guan cha lun (Essay on tea in the Da Guan reign, 1107-1110) expressed this about the humble black bowls: “For green and black teacups are highly valued, and those with streaks like hare’s fur most of all.” Furthermore, the Ching-te-Cchen T’ao Lu, written in 1795 by Lan Pu (trans. by Sayer), expresses: “In the Sung Days they preferred open-mouthed bowls for tea and considered the hare’s fur cups of Chien-an as the best.” (pg. 64)  These precious yet humble teabowls were not just favored by the court, but by scholars and Chan (Zen) monks as well.

The literary records of hare’s fur and Jian teabowls in China and Japan are extensive.  Literati culture flourished during the Song dynasty; a gentleman must not only have been well read in the classics, but also a connoiseur of fine arts, and cultural pursuits such as poetry, music, tea and wine drinking.  Renowned Northern Song literatus Su Shi mentions the pleasure of using Jian teabowls: “Surprised, I suddenly saw the hare’s-fur markings (tumao ban) on my teabowl; I ladled fine wine from my spring jar.” (qtd. In Mowry pg 30). Likewise, the Song dynasty scholar-official, Cai Xiang, in his treatise on tea or Chalu, written on imperial command between 1049-1053, expresses both the practical and aesthetic merits of Jian teabowls from Fujian, and exclaiming they are the best:
"Tea is white, so black bowls are best. Tea bowls made in Fujian are deep in color, they are bluish black with hare’s fur markings. Such bowls are thick-bodied; once warmed they retain their heat, so the tea does not cool too quickly. Tea bowls from other regions are either too thin or too purplish brown, so they are not as good as those from Fujian.  (qtd. in Mowry, pg 30).

During the sixth century, the Indian Monk Boddhidharma introduced the merits of drinking tea while meditating to Chinese Buddhists.  Chan (Zen) Buddhists of the Song dynasty, whose monasteries were numerous around Fujian, used whipped tea in ceremonies where tea was passed hand to hand between practitioners.  They also recognized the practical and aesthetic value of Jian teabowls. In 1223, Japanese Zen priest Dogon, along with Kato Shiro and Saemon Kagemasa, visited the monastery on Mount Tianmu (Temmoku in Japanese), in Zhejian province, where Jian teabowls were in common use.  Enamored, they traveled to Fujian to learn how to produce these teabowls.  When they returned to Japan, they set up a kiln at Seto, to produce a similar product, which they called temmoku.  Nevertheless, the original teabowls from Jian were valued over the local production. Song dynasty Jian teabowls were imported into Japan in great quantities, beginning in the 13th century and lasting at least through the 16th century, as prized antiques to be used in Japanese tea ceremonies.

Rights
If you are interested in using an image for a publication, please visit http://umma.umich.edu/request-image for more information and to fill out the online Image Rights and Reproductions Request Form. Keywords
bowl
chawan
reproductions
stoneware (pottery)
tea bowls
temmoku