W. Jones, Lime-burner, Thames Street, one of the "Sixteen Etchings," or the "Thames Set" 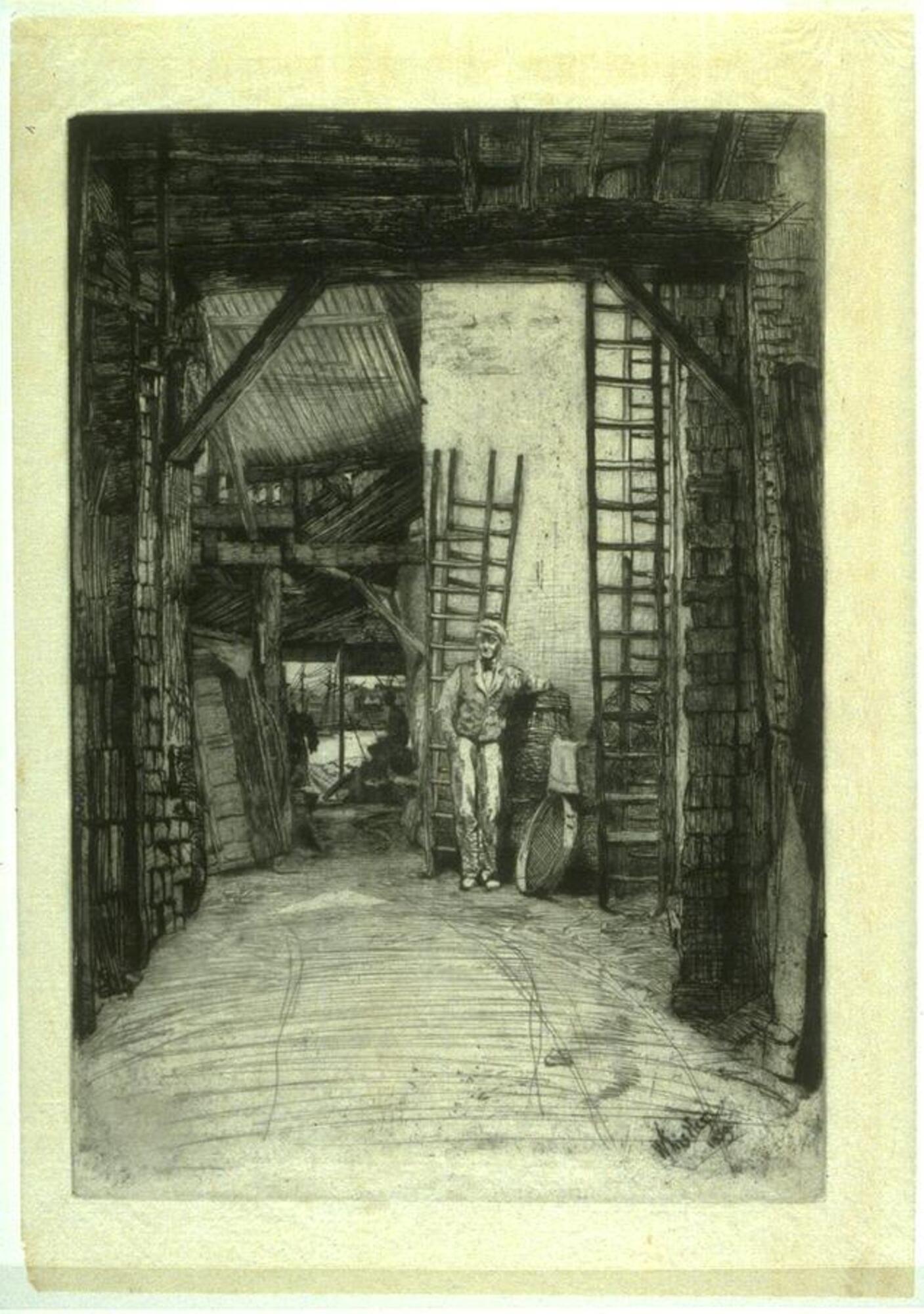 Title
W. Jones, Lime-burner, Thames Street, one of the "Sixteen Etchings," or the "Thames Set"

Label copy
The Lime-burner, from Sixteen Etchings,
or the Thames Set
1859
Etching and drypoint on laid Japan tissue
Second state of two (Kennedy 46)
The Alfred E. Pernt Memorial Fund, in honor of Dr. of Technical Sciences Max H. J. Pernt and his wife Anna Pernt (née Mueller), 1986/2.14
Unlike the straightforward dockside panoramas of London’s commercial shipping district, this etching presents a complex examination of light and shadow worthy of Rembrandt, whom Whistler greatly admired. Here dramatic chiaroscuro effects are used to render a contemporary image of working-class London. As in the French Set, figures are seen in an interior from a doorway: one man stands in the middle distance under a shaft of light, while at the far end of the building another sits looking out towards the river; the scene is framed on three sides by intricately hatched wooden timbers. The man regarding the viewer is bathed in sunlight from an overhead opening while the framing passage and the more distant space containing the other figure are dark, conveying spatial recession. The alternation of light and dark extends to the ladders: the pair behind the standing man are as brightly lit as is the nearby figure, while the pair closer to the viewer are in comparative shadow. This print was originally exhibited at the Royal Academy in 1860 with the title, W. Jones, lime-burner, Thames Street, which underscores its portrait-like quality.

Subject matter
Whistler repeatedly experimented with doorways framing views and with the dramatic chiaroscuro juxtapositions of light and dark passages. In this image of a warehouse in London, Whistler creates great visual tension between the densely worked timbers of the foreground 'frame' and the limpid quality of the light around the figure of Mr. Jones and the small triangle of light on the floor.

Physical Description
A man stands within a wooden building, postioned half-way down a deep vista that goes all the way through the building. At the far end of the passageway, a seated figure faces out looking at water and buildings on the opposite shore. The standing man's figure is illuminated by a bright (unseen) overhead light source, such as a skylight, and pairs of ladders are visible on either side of his figure. The foreground of the image consists of dark timbers that frame the view of the passageway and figures; beyond the man, the wooden architecture becomes a jumble of different sloped ceilings and walls, suggesting that this part of the building was constructed at different times or ad hoc.