Nocturne: Palaces, One of the 'Twenty-six Etchings,' or the 'Second Venice Set' 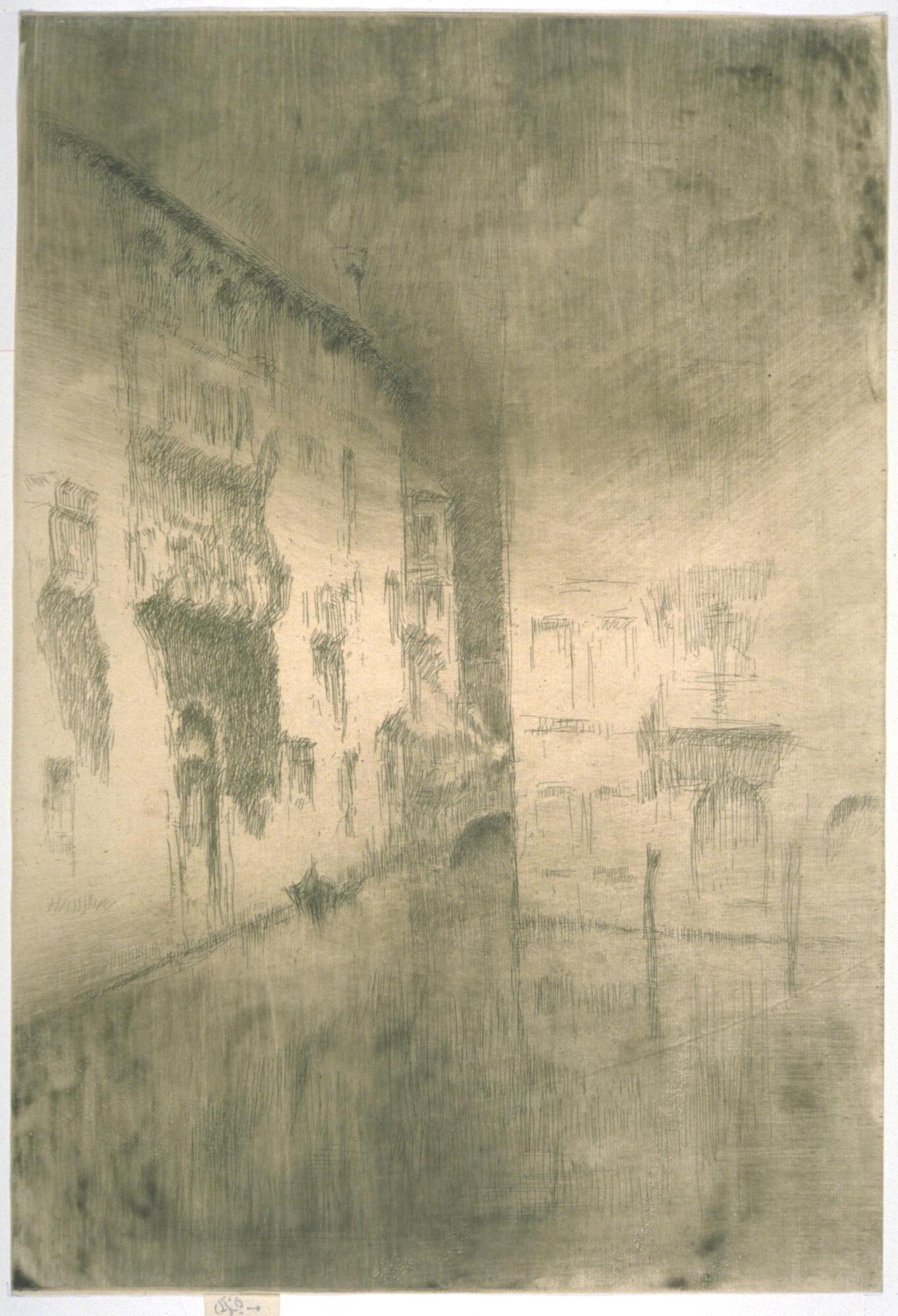 Title
Nocturne: Palaces, One of the 'Twenty-six Etchings,' or the 'Second Venice Set'

Label copy
Nocturne: Palaces, from Twenty-six Etchings, or the
Second Venice Set
1879–80
Etching and drypoint
Seventh state of nine (Kennedy 202)
Bequest of Margaret Watson Parker, 1954/1.387
In this print, rather than minutely describing the buildings with an etching needle, a sense of pervading mystery was accomplished through the application of the ink to the plate. As with the Nocturne from the First Venice Set, the lines on the plate served as a fixed matrix, and films of ink were applied to shape the sense of darkness on the water and sky and the dim reflected glow of lamps; such carefully gauged gradations of plate tone flouted the accepted convention of cleanly wiped etching plates. The Nocturne and Nocturne: Palaces were re-inked for each impression, so that each is essentially a monotype, a contemporary practice that involved an artist’s brushing ink directly onto a printing plate and making from it a single, unique print.
-------
March 28, 2009
In addition to an economical use of the etched line, the Venice etchings incorporate the presence of plate tone—the use of a thin residue of ink left on the plate—a technique that had been considered the province of sloppy or inept printmakers. Nocturne: Palaces is an outstanding example of Whistler’s use of plate tone to evoke the palpable humidity of Venice. Unlike the Street at Saverne, also on view in these print drawers, where the night sky and deep shadows on buildings are conveyed through dark etched lines, Whistler uses only lightly etched lines to suggest the balconies, doorways, and distant bridge. Instead of a heavily worked sky, Whistler manipulates a thin film of ink to evoke the nocturnal sky, which is echoed in the plate tone in the reflections of the foreground. Heavy-handed etching has given way to evocative depiction and unlike the Street at Saverne, this image of a back canal in Venice is full of luminosity.

Subject matter
Whistler experimented with artistic printing with his etchings of Venice, retaining films of ink that create an atmospheric effect. In this plate, these films of ink are used to evoke the dark, humid environment of Venice, seen principally in the regions of the sky and water. Plates like "Nocturne: Palaces" were printed so that the amount of ink retained varied, creating very different atmospheric effects.

Physical Description
A nighttime view of canals in Venice. Walls of buildings at rough right angles to one another, connected by a footbridge in the distance, are lit to reveal massings of the architecture--balconies, doorways, windows. There are no people apparent; the sky and water are both very dark.

Exhibition Objects from On Beauty and The Everyday: The Prints of James McNeill Whistler
(Part of 2 Learning Collections)
JMT TEst