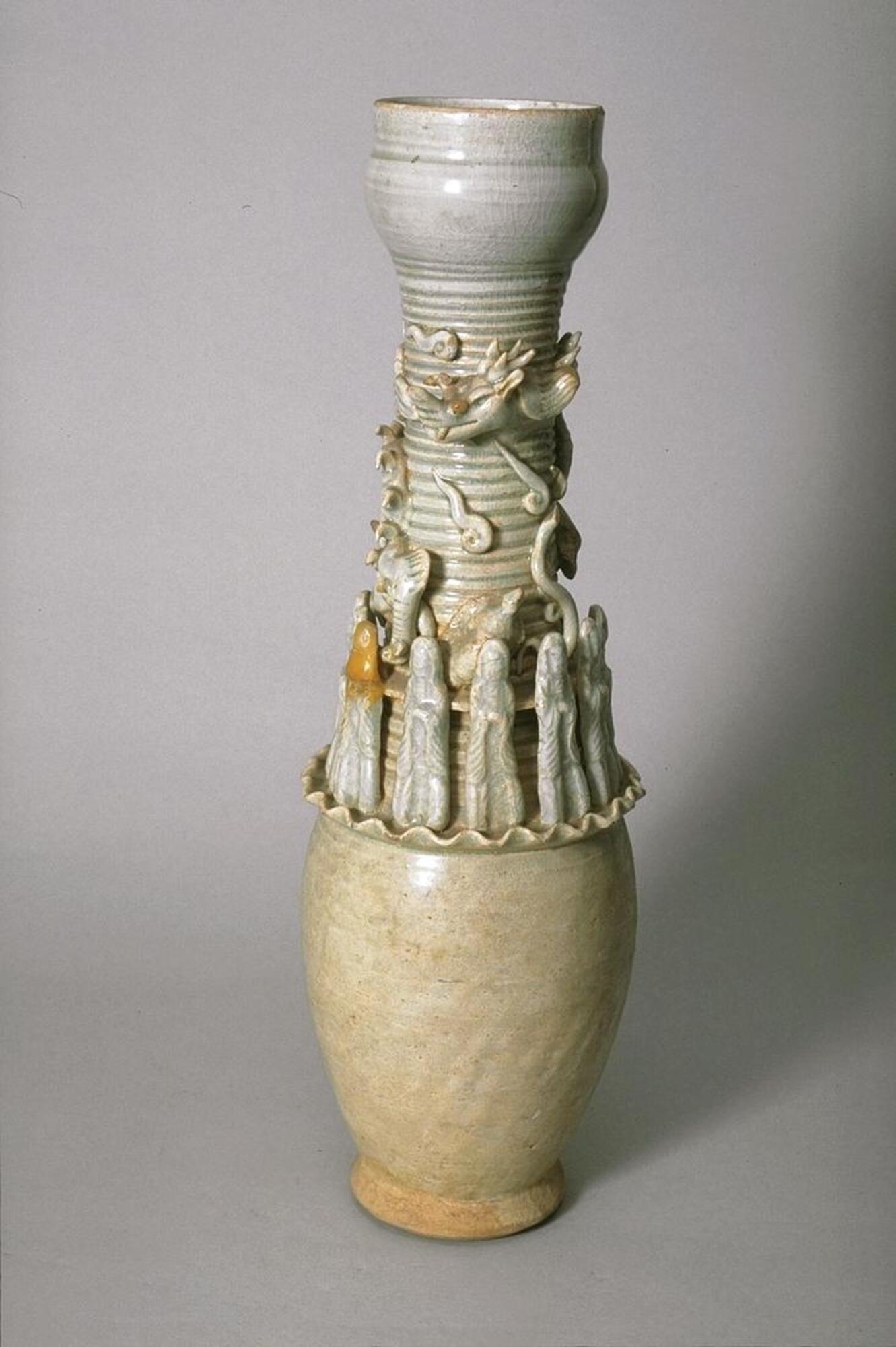 Subject matter
A qingbai funerary jar of the Southern Song dynasty (1127-1279).  Based on celadon funerary jars from the Tang dyansty, they started to appear as taller jars with Daoist immortals and cosmological beings during the Northern Song dynasty (960-1127). The base of the jar’s neck is encircled by twelve small figures, representing the twelve gods of the zodiac. Above them appear auspicious sky symbols, and originally there would have been a lid. Such jars are one of a pair known as “Dragon and Tiger vases,” and have been found in almost every excavated tomb in southeast China (the modern provinces of Jiangxi, Anhui and Fujian) of the Southern Song period (960-1279). These vessels may have held the ashes of the deceased, or grains for consumption in the afterlife. The motifs on these jars attest to the persistence of Daoist conceptions of the universe that date back at least to Han times (206 BCE–220 CE) in China.

After the fall of the Tang dynasty (618–907), the practice of building vast and lavishly furnished underground tombs was gradually abandoned. This shift in burial practice may be attributed in part to the growing influence of Buddhism, whose followers often chose cremation, but owes even more to the collapse of the economic underpinnings and ritual context of the Tang imperial court. After a half-century of chaos, China was reunified under the Song dynasty. Under imperial patronage, painting, poetry, and ceramics were nurtured to unprecedented levels of refinement. These jars, examples of a type found widely in Song tombs, exemplify the new taste for simplicity and elegance. They were thought to be associated with rites concerned with immortality, perhaps housing the spirit or soul of the departed in the manner of hunping (混瓶), "jar for the soul," of the Western Jin period (265-316).
Qingbai wares were produced in southern China during the Song dynasty (960-1279)  at Jingdezhen, Jiangxi in imitation of northern Ding porcelains. A reduction atmosphere in the Jingdezhen kilns and a high kaolin and low iron content in the clay result in the pale blue cast to Qingbai wares. Chinese connoisseurs of the time praised the color and feel of qingbai tea bowls as being like “icy jade,” and the ware went on to make Jingdezhen the porcelain capital of the world from the tenth to fourteenth centuries.

Physical Description
A tall porcelain vase with an ovoid lower body, and a tall, narrow ribbed neck, and dish shaped mouth. The jar is on a footring. The neck has several applied figures of molded immortals and sculpted cosmological creatures, including a dragon and clouds.  The jar is covered in a white glaze with a bluish green tinge. It is missing the lid.

Rights
If you are interested in using an image for a publication, please visit http://umma.umich.edu/request-image for more information and to fill out the online Image Rights and Reproductions Request Form. Keywords
Qingbai
ceramic (material)
clouds
dragons
jars
porcelain (material)
porcelain (visual works)
urn