And Naturally Ripens into Fruit

Collection Object
Scholars in a Thatched Hut Under an Old Tree 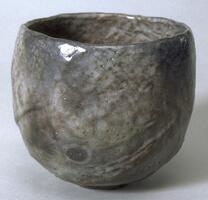 Collection Object
Incense Container in the Shape of a Plum Flower

Label copy
A mizusashi is a container for the fresh cold water that is used to replenish a kettle during the practice of wabi tea, which finds elegance in rusticity. Along with a tea bowl and a tea container, a mizusashi has been an important tea implement since the time of wabi tea pioneers in the sixteenth century. UMMA has a remarkable collection of mizusashi dating from the mid-Edo period to the contemporary period, and many were made by master potters in important tea ware kilns such as Raku, Seto, and Hirado.
The small red container was made by Raku Keinyû, who was in the eleventh generation of the Raku family lineage founded by Raku Chôjirô (d. 1589), a Chinese immigrant potter who collaborated with influential tea master Sen no Rikyû (1522–1591). This Raku mizusashi is hand-built rather than wheel-thrown, and roughly chiseled using bamboo tools. The resulting irregularity is the epitome of the rustic wabi tea aesthetic. Such wares were often collected and used alongside porcelain wares, such as Hirado ware, a smooth, painted ware commonly given as gifts to the ruling Tokugawa shogunate (military government) and daimyos (feudal lords). The contrast between these two types of wares was highly valued in the wabi tea aesthetic. Two pieces highlight the peristance of these two types of tea wares. The Meiji period virtuoso potter Seifû Yohei III’s elegant mizusashi is decorated with fine bamboo stalks made by incising the outlines of the bamboo in leather-hard clay, and then filling them with a white slip. Nakazato Takashi’s footed water jar, with its squat, bottom heavy form, floppylooking protruding handles, and thickly rimmed lid, pays homage to Momoyama period (1583–1615) models. But while Karatsu ware is normally evenly glazed, Nakazato has allowed the ash glaze to puddle and form brown streaks.

Physical Description
This white porcelain jar has the design of six Chinese sages and an attendant boy with blue underglaze in delicate brushwork. One sage is reading a book, while another is listening. The attendant boy is standing next to the sage with a book. Other four sages are looking at a long hand scroll. Some sages hold staffs on their hands. One sage has a string instrument. The jar has a broad shoulder and an inverted mouth, where the lid is placed. The knob of the lid is in a shape of a reclining boy (unpainted), surrounded by books, hanging scrolls, a cane, and a fan, which are painted with blue underglaze. It also has a shallow foot.