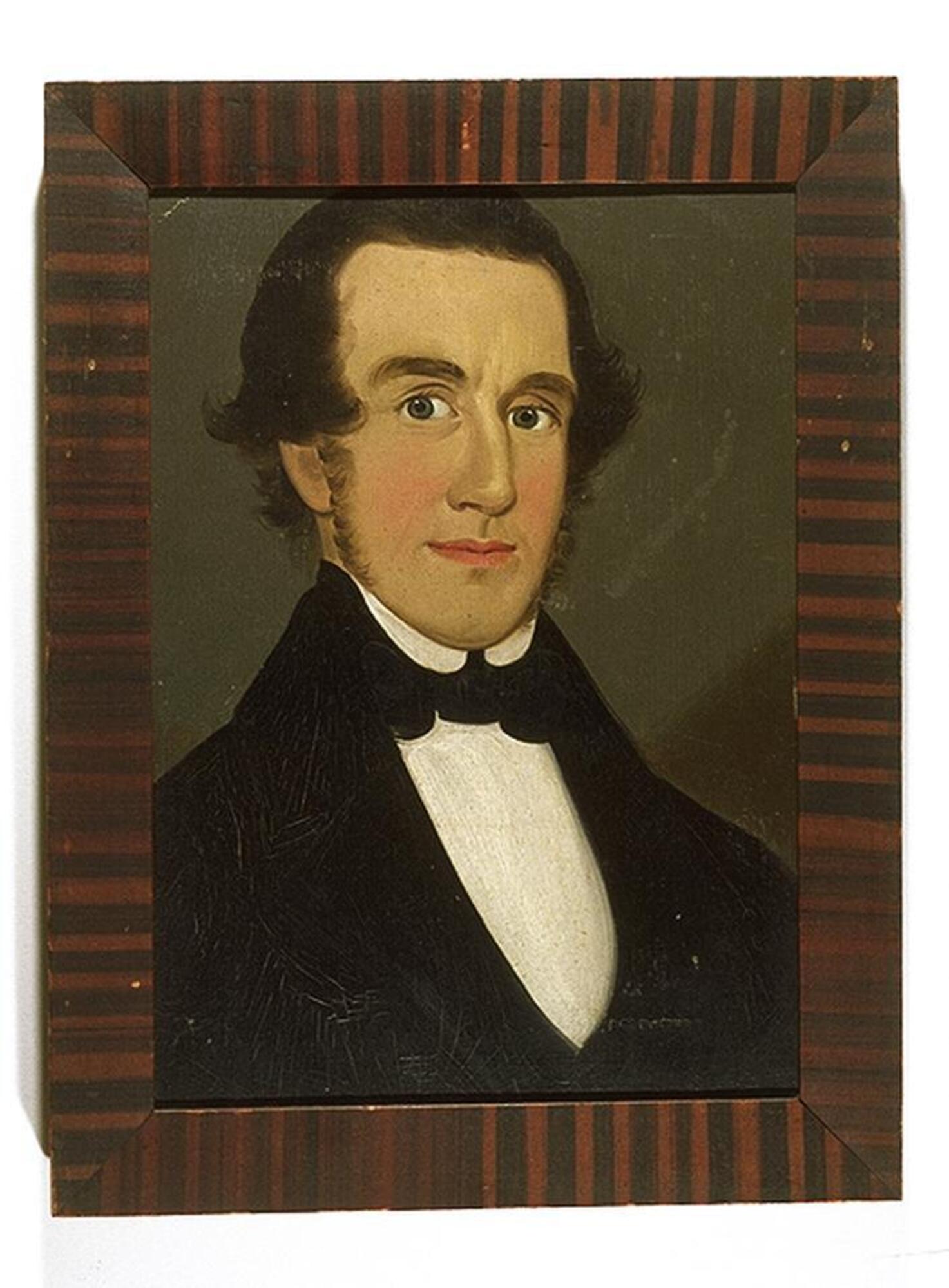 Title
Portrait of a Man

Medium & Support
oil on composition board, in painted frame

Label copy
Prior-Hamblin School
United States, 19th century
Portrait of a Woman
circa 1840
Oil on composition board
Portrait of a Man
circa 1840
Oil on composition board
Gifts of the Daniel and Harriet Fusfeld Folk Art Collection, 2002/1.175
and 1.176
William Matthew Prior started his portrait career in Maine; by 1831, he had joined ranks with his brothers-in-law Nathaniel, Joseph, and Sturtevant Hamblin, also painters. The four ran a joint painting studio, doing everything from street signs to portraits. The four painters developed such similar individual styles that unsigned paintings such as this pair of portraits are attributed simply to the Prior-Hamblin School. Clients of the Prior studio were charged along a sliding scale; a portrait with “no shade” cost $1, while detailed likenesses cost as much as $35. By 1856 the Hamblin brothers appear to have moved on to other occupations, while Prior continued to paint portraits until his death in 1873. From time to time, Prior also took long tours throughout New England and as far south as Baltimore, during which he traded his portrait services for bed and board.
(Out of the Ordinary, 2010)
Although Sturtevant J. Hamblin, William Matthew Prior, William W. Kennedy, E. W. Blake, and George Hartwell are grouped in the Prior-Hamblin School, the only evidence of a connection between them is the relationship between Sturtevant J. Hamblin and his brother-in-law William Matthew Prior. The other artists in the "school" are linked to Prior and Hamblin’s work because of their similarities in style. Characteristics of the Prior-Hamblin style include dark backgrounds, inconsistencies in anatomy, similar modeling techniques, and a comparable manner of presentation, including a three-quarters frontal view, a blank background, certain highlights of facial features, and an overall flatness and directness of the figures. Prior and Hamblin worked in Portland, Maine and Boston, Massachusetts. Apparently, Prior and Hamblin adjusted the time needed to complete a work according to the amount a patron was willing to pay, and Prior was said to allow the patron’s willingness to pay determine the portrait’s quality. Whether other artists of this circle followed this practice remains unknown.
Lindsay Meehan
Modern and Contemporary Art Intern
2002