The late nineteenth century witnessed a resurgence of beautifully handcrafted decorative objects and the appreciation of fine craftsmanship—this was a reaction to the poorly designed, mass-produced goods that came with industrialization. Hand-crafted objects, however, were time-consuming to make and could be produced only in limited numbers. Around the year 1900, in an effort to make well-designed objects accessible to the larger public, artists began to reevaluate the importance of easy to reproduce designs. The refined opulence of glasswork typical of Louis Comfort Tiffany and the Arts and Crafts movement gradually gave way to a more modernist aesthetic that emphasized cleaner lines and plain, undecorated surfaces.

Many of the glassmakers featured here were initially inspired by the Art Nouveau movement—characterized by organic forms and motifs derived from nature—before developing more austere idioms. Émile Gallé’s technique of glass making featured heavy, usually opaque glass that he etched or carved with plant motifs. René Lalique’s works, often featuring various flora and fauna, played with the effects of transparency and surface treatment. François-Emile Decorchemont is perhaps best known for his technique of coloring glass to make it resemble translucent stones, while the work of Orrefors Glasbruk, a Swedish glass manufacturer, characteristically has clean lines of brilliant crystal that bring to mind frozen liquid. This work illustrates the measured shift to design along industrial principles by modernist reformers, in which beauty is achieved through form in its purest state rather than by means of applied ornament.

The first quarter of the twentieth century saw the rise of a number of art potteries in the United States, a facet of the international Arts and Crafts Movement. Founded in Detroit in 1907 by Mary Chase Stratton (later Perry) and Horace James Calkins, the Pewabic Pottery concentrated on hand-built vessels whose shapes were largely derived from traditional Asian ceramics; these refined forms were combined with a rich variety of iridescent glazes that became the Pottery’s hallmark. Most of the works in the Museum’s collection come from Margaret Watson Parker, for whom they were personally selected for their quality and beauty by Mary Chase Stratton.

Ann Arbor-based Markham Pottery was founded by Herman C. Markham, who, in the mid-1880s, began working with the clay in his yard to create utilitarian vases with an understated beauty. By 1905, Markham was joined in the enterprise by his son Kenneth. Their pottery consisted of a low-fired ceramic body based on classical forms decorated with a distinctive webbing of low relief clay that is part of the mold. Usually fired with matte glazes in earthen colors and stains, the delicacy of Markham ware made their products quite popular.

Rookwood Pottery is one of the oldest fine art potteries in the United States. It was founded in 1880—at the height of the Arts and Crafts movement—in Cincinnati, Ohio by Maria Longworth Nichols, and soon became America’s foremost art pottery. Rookwood was the first pottery to hire a chemist to develop its distinctive glazes, and also employed professional artists, among them several Japanese craftsmen. Although Rookwood Pottery won its reputation for its early hand-painted pottery, many of its later vessels were production wares made for a broad audience; by the 1920s nearly every local bride had a piece of Rookwood pottery among her wedding gifts. 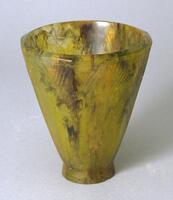 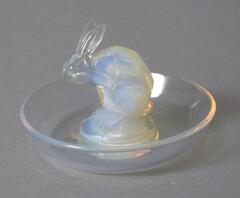 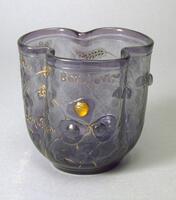 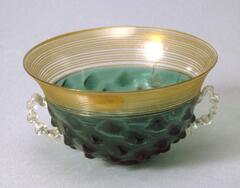 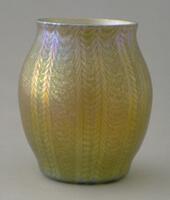 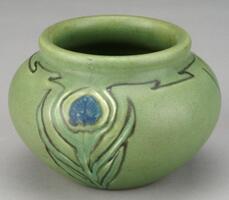 Cabinet A: Shelf 2
<p>Selections from the Bohlen Wood Art Collection ...

Cabinet A: Shelf 3
<p>Selections from the Bohlen Wood Art Collection ...

Cabinet B: Shelf 1
<p>Selections from the Bohlen Wood Art Collection ...

Cabinet B: Shelf 2
<p>Selections from the Bohlen Wood Art Collection ...

Cabinet B: Shelf 3
<p>Selections from the Bohlen Wood Art Collection ...