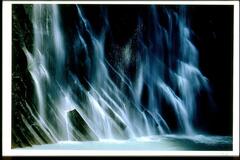 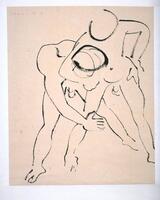 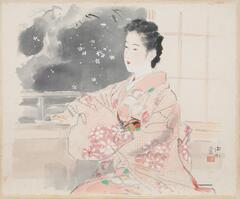 Label copy
The male and female figures in Japanese prints are often difficult to discern. The conspicuous difference is that men can be identified by the shaved tops of their heads. When an actor portrays a feminine role, he would wear a piece of cloth on his head to conceal the shaved area, as depicted in this print. The lantern indicates the woman in the drama is going out in the night. She was perhaps using the light as a signal to her lover while she hid in the dark. The artist’s rendering of the light adds a clever dramatic effect.

Subject matter
Iwai Hanshirō IV as an onnadate in an unidentified play.

The artist Katsukawa Shunshō was a member of the Katsukawa school and studied with Miyagawa Shunsui. He is noted for producing particularly austere yakusha-e.

The actor depicted in the print is Iwai Hanshiro IV, part of the Yamatoya guild. He was the son of a puppeteer and was one of the most famous onnagata players of the late 18th century. In this image, his female role is easily identified by the actor's covered head (male characters almost always having slightly shaved heads).

Physical Description
A woman with a sword looks back to her left. Her right hand is hidden by her long sleeve, just above the sword handle. Her blue outer robe is partially removed and reveals a patterned red and blue robe beneath. The bottom of the outer robe has a spray of flowers, and a crest adorns the left sleeve. A lantern lights up the stage behind her.

Rights
If you are interested in using an image for a publication, please visit http://umma.umich.edu/request-image for more information and to fill out the online Image Rights and Reproductions Request Form. Keywords
kimonos
lanterns (lighting devices)
swords
theater (discipline)