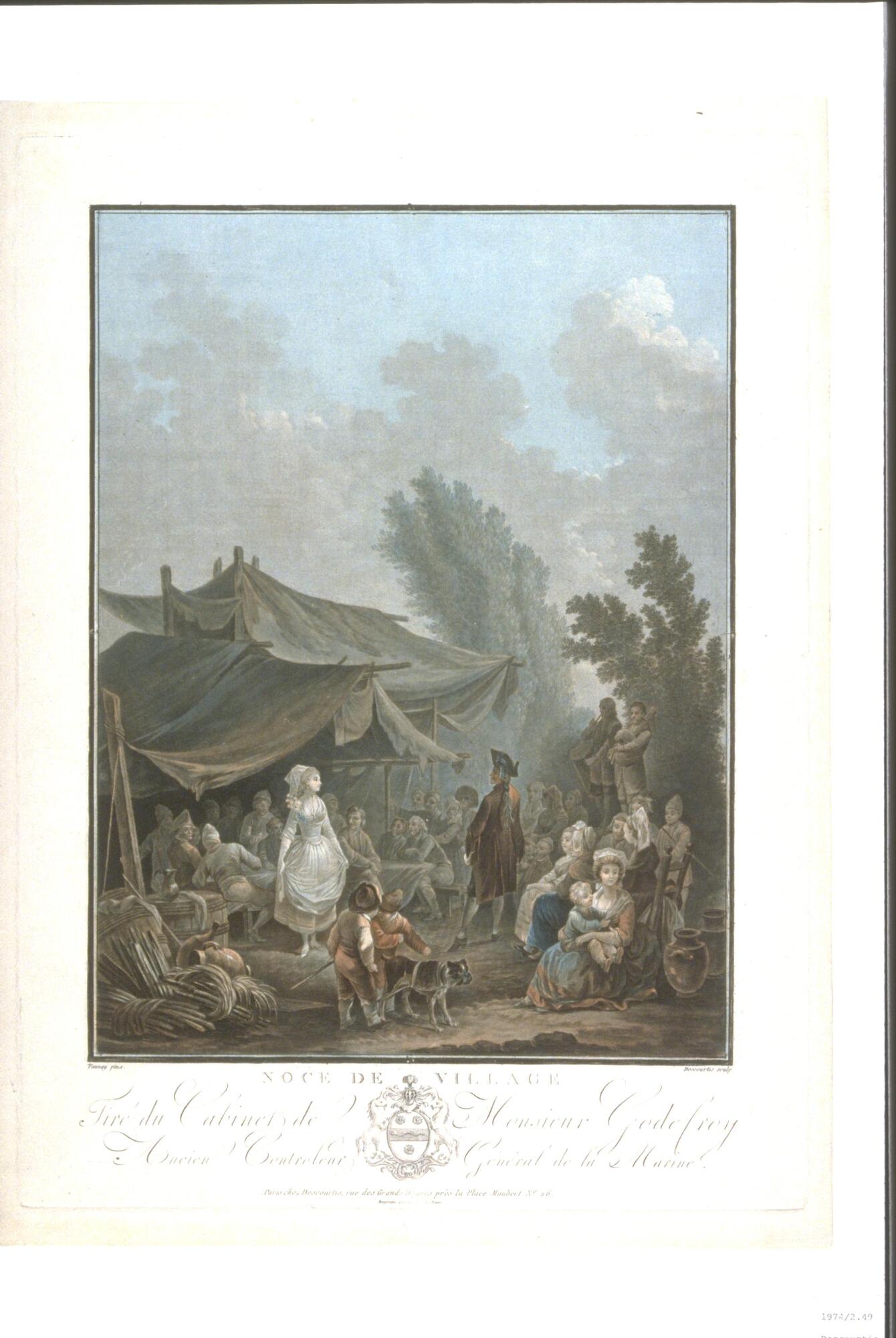 Label copy
Prints not only reproduced existing works, such as paintings by Watteau or Fragonard, but also were produced from drawings created specifically as models for engravers. This is the case with the Noce de Village. The painter Nicolas-Antoine Taunay provided Descourtis with a gouache from which Noce de Village was created. The print captures all the delicate modulation of tone and color of the Taunay source. Shortly after handing the gouache to Descourtis, Taunay left for a two-year residency in Rome. Noce de Village proved so popular that Descourtis approached Taunay shortly after his return to France for another gouache that could become a pendant to the first. Foire de Village was engraved two years after the Noce and the two images, which were each printed from five separate plates, stand as monuments to Descourtis’ great mastery of the color printing process. Descourtis was a student of Janinet, and the superb coloration and technical mastery evident in this pair of crayon-manner engravings reflects the skill acquired under Janinet’s tutelage.
Descourtis created this print based on a gouche by Taunay before he left for a two-year residency in Rome. The print proved so popular that when Taunay returned to France, he created another gouache as a pendant, which Descourtis also translated into a color print. For the related print, see 1974/2.48.
Exhibition label copy from "Eighteenth Century French Prints and Drawings," February 1 - May 4, 2003 by Curator Carole McNamara
Although closely resembling aquatint, the work of Jean-François Janinet and his pupil Charles-Melchior Descourtis is actually an extension of crayon-manner engraving. Rather than using a resin to create the fine tonal qualities desired, as is the case in aquatint, both Janinet and Descourtis used a series of fine rockers and stippling tools (sometimes through a ground) to create the delicate tonalities found in their color prints. See 1973/1.736 and 737 and also 1974/2. 48 and 49. [Source: Grove Dictionary of Art and Regency to Empire: French Printmaking 1715-1814, Baltimore Museum of Art, 1985]