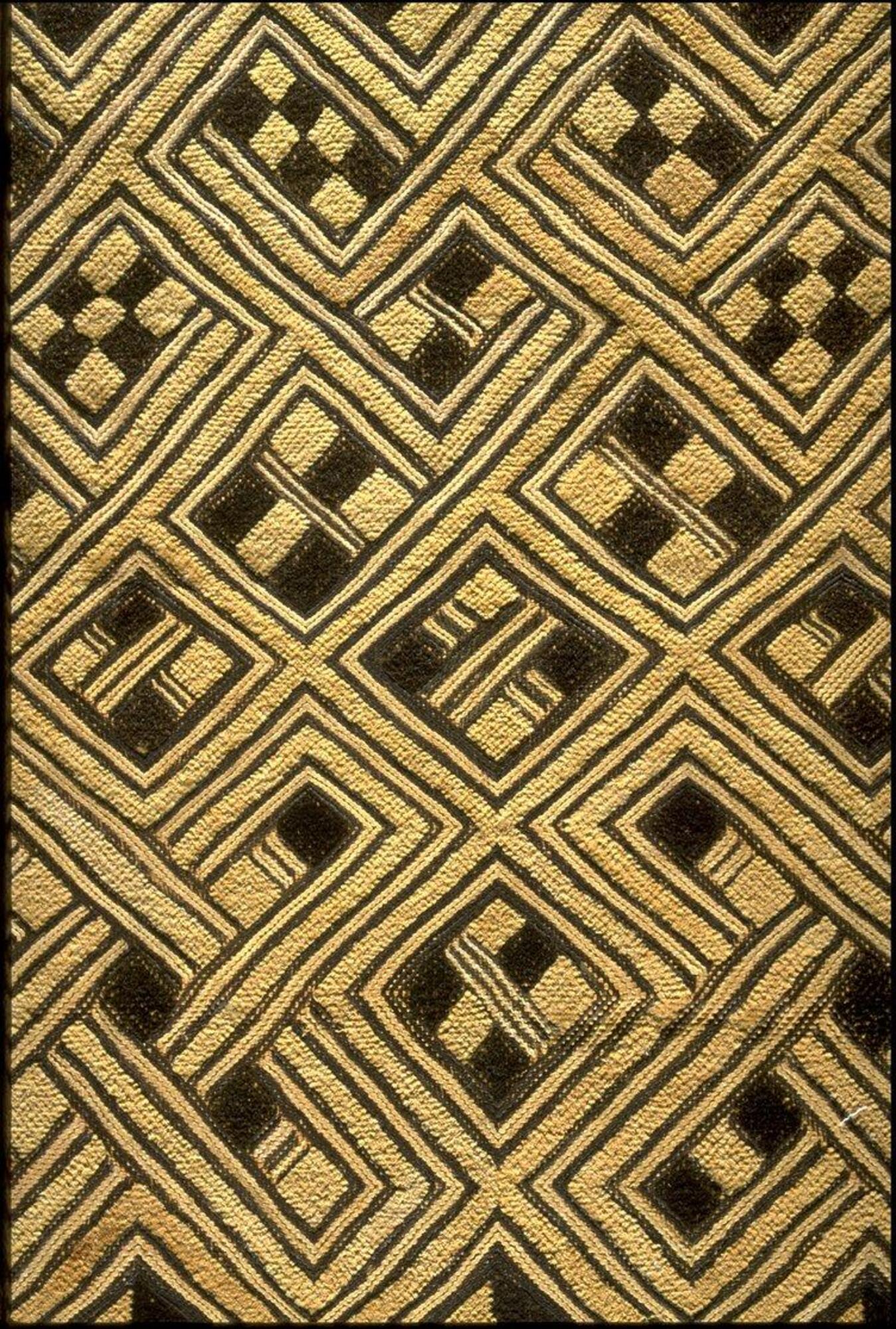 Label copy
Embroidered plush textiles are produced exclusively by royal Kuba women, and are worn, wrapped around the waist and secured with a belt, only by upper class women and men. People of lower classes may wear textiles in the same manner, but do not wear embroidered cloths. The base cloth, made from raffia (fibers from the raffia palm tree,) is normally woven by men, but all of the decorative work is done by women. The textiles are generally covered with geometric patterns, similar to patterns found on Kuba basket work, woodwork, sculpture, and female body scarifications. Patterns may be given names, but the same pattern will likely be given a different name by different people. There are no universal meanings attached to these motifs. The textiles are often called "velvets" because of their plush texture. At one time, textiles like this were made throughout much of central Africa, but today the Kuba are the only people continuing the practice.

Subject matter
The Kuba peoples are renowned for their elaborate, geometrical surface design, such as applied to this cloth. Also referred to as cut pile, raffia cloth, Shoowa textile or Kasai velvet (Velours du Kaisai), Kuba cloth is often made from barkcloth: a felt fabric, typically not classified as a textile because it is not woven. Their plush “velvet” texture is achieved through the cut pile technique, where a sharp knife is used to gently clip off the tufts of the palm thread.

In the 19th century, decorated raffia cloth was used as a marker of prestige, as currency, to pay tribute, settle legal disputes, and in public displays such as the funerals of high-ranking titleholders. Additionally, they were often used as initiation objects during ceremonial rites of passage. Though barkcloth is the typical fabric, recently industrial cloth has been used as a replacement.
The textiles are generally covered with geometric patterns, similar to patterns found on Kuba basketry, woodwork, sculpture, and female body scarifications. Patterns may be given names, but the same pattern will likely be given a different name by different people.

In this particular cloth, the lines folding onto one another in the lower left section can possibly be considered a loop or, according to the Bushoong, an INGAL: knot of the wood. The diamond pattern in this cloth is created through a repetitive crossing of  lines. A double crossing can possibly be considered a reference to Woot the mythical founder of the Kuba, whose mother invented mat weaving.

Physical Description
Square panel with intersecting lines that form a diamond pattern with checkered squares in between the intersected lines.