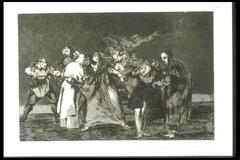 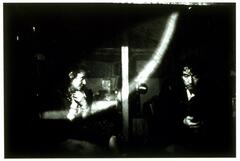 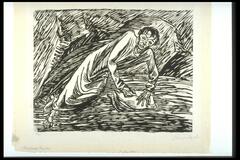 Subject matter
This photograph is of a darkened interior in which a man and woman sit. Their faces and hands stand out in the shadows, while their surroundings fade into a murky darkness. The woman’s profile faces the man, and appears to be in the process of addressing her companion, her hands clasped together. The man however looks straight ahead and to the floor, his downcast gaze relating an introspective and weary expression. A curved band of light arcs through the space, starting at the lower left corner up to the upper right. A post or support beam is caught in the light, forming a vertical bright shape that appears to divide them. The man in this photograph is named Joe Donoghue, the leader of a group of Travellers, a small ethnic minority in Ireland. Travellers tend to consist of nomadic communities that move from site to site, assembling makeshift caravans and camps. This photograph was created in Joe Donoghue’s hut, which has been fabricated out of scrap metal and wood. This camp was located in an area outside of Dublin known as Cherry Orchard.

Physical Description
This photograph depicts the darkened interior of a hut with a man and woman seated inside.

Ireland
(Part of: Land and People)
Photographic Portraiture 1949-1969
(Part of: Identity and Self-Understanding)