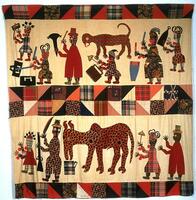 Label copy
March 28, 2009
The Annang-Ibibio peoples created vivid, narrative appliqué cloths for funerary shrines erected for members of the men’s ebie-owo initiation society. This cloth’s festive imagery indicates that the deceased was a respected man of high status. The upper panel shows the principal mourners in their funeral attire playing drums and gongs; the lower panel features the sacrificial cow, procured for the feast at great expense. Red dots represent the coral beads worn by newly initiated women and suggest the wealth of a man with multiple wives.
By the 1970s, shrine cloths were extremely rare. The Biafran War (1967–70) devastated the region, and many traditions, such as the creation of shrine cloths, were not revived afterwards.

Subject matter
Vivid, narrative appliqué cloths for funerary shrines were made exclusively for members of the men’s Ebie-owo initiation society among Annang-Ibibio peoples. The Ebie-owo society was an institution that men seeking to be warriors wanted to join. Shrines, called nwomo, were erected six months to a year after a man’s death, and it was not until a shrine was made that his spirit could join the ancestors. The colors featured predominantly in the cloth have particular meanings: red is the color of blood, meant to inspire courageous acts; black is associated with life and ancestral spirits; white is associated with the spirit world and death. These “second funerals” involved much pageantry in honor of the deceased, which is “documented” in the cloths' festive imagery although these cloths have not been created in recent years.

Physical Description
A square appliqué cloth with two narrative registers separated by two rows of squares, each bisected with solid and factory printed plaid cloth; the top and bottom border are a similar checked motif. Red, black and white predominate. The top narrative panel has a stylized leopard and six human figures in festive dress, playing musical instruments. Lower panel shows four figures in festive dress, and an ox feeding from a bucket. All the images and figures are appliquéd.

Rights
If you are interested in using an image for a publication, please visit http://umma.umich.edu/request-image for more information and to fill out the online Image Rights and Reproductions Request Form. Keywords
funerary art
men (male humans)
shrines (structures)
textiles (visual works)