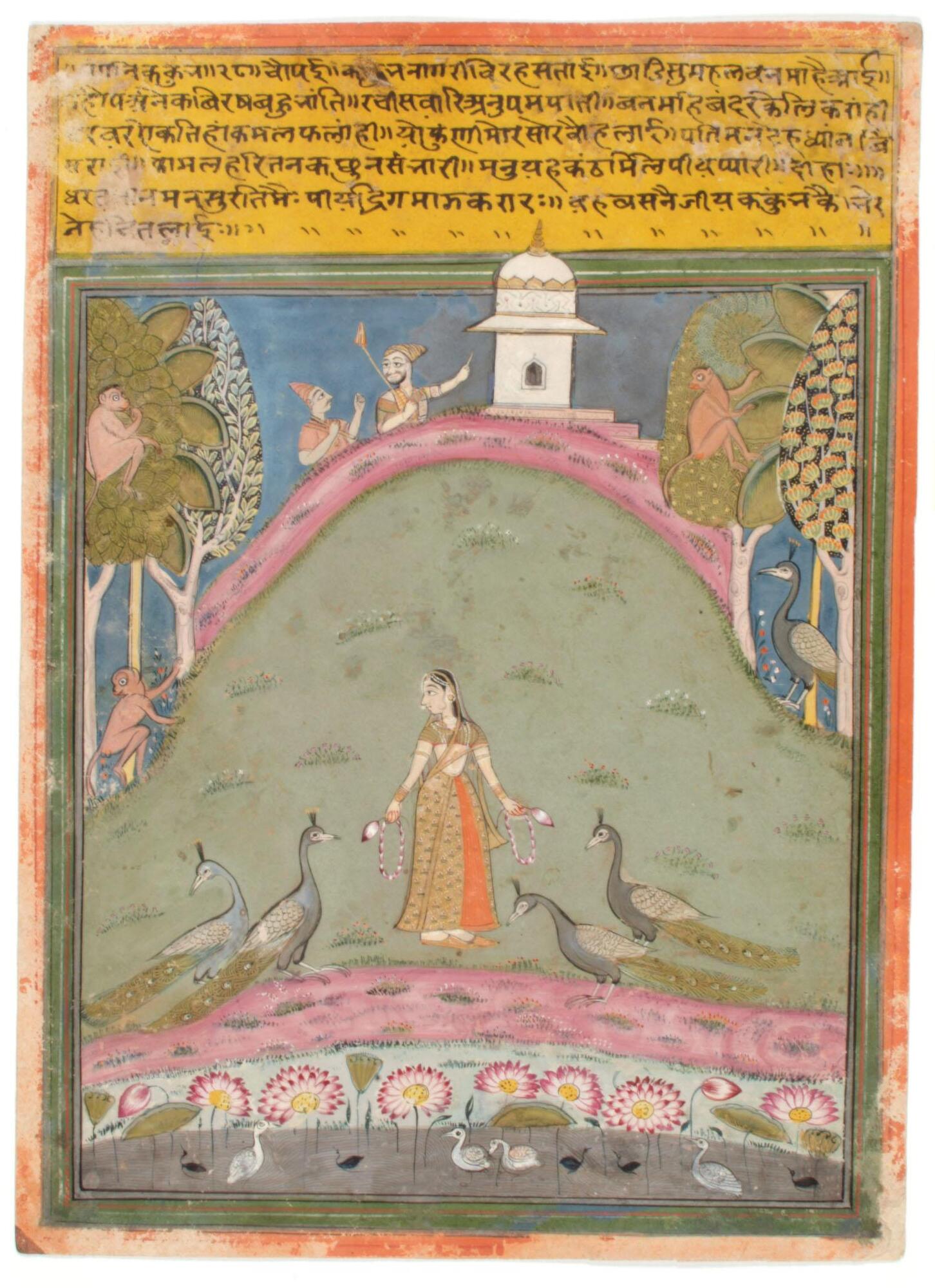 Kukubha ragini:
Caupayī: The lady Kakubhā is unhappy because she is
separated from her beloved. She has left her palace with all
its comforts and lives in the forest, which is thick with trees
and undergrowth. She writes a letter to her beloved, her eyes
overflowing with tears. Monkeys can be heard chattering as they
play in the forest. There is a lovely pond nearby, which abounds
in beautiful lotus blossoms. There are countless peacocks,
cuckoos, and other birds chirping and singing, but the lady is so
engrossed in thoughts of her lover that she has even forgotten to
take care of herself. She appears to be in an imagined embrace
with her lover.
Dohā: She is lost entirely in thoughts of her lover; her eyes are
impatient to see him. Her spirit survives in her body; she does
not die, although the grief and separation are unbearable.
(translation by Stephen Markel)

Ragamala (meaning “garland of ragas”) paintings
were meant to evoke the same emotional
responses as ragas—short musical phrases that
formed the basis of Indian classical music and
were associated with a particular mood, season,
and time of day. Ragamala paintings would have
been mounted in albums, following the order
of the ragas, which were arranged into families,
headed by the “husband” raga and followed by
the “wife” ragini, and, occasionally, a variety of
children. These three images illustrate scenes
of love and lovesickness, a common theme in
Ragamala painting. They are in the Jaipur school
style, known for its vivid colors, idealized human
figures, and detailed, yet abbreviated landscapes.
The Ragamala paintings shown here include
both visual imagery and texts. The source of
the text is unknown, but versions of it appear
in many Ragamala paintings from this period.
Known as meditation aids (dhyāna-mantra),
these texts shed light on the main theme of the
images. Each is comprised of a rhyming quatrain
(caupayī) that describes the narrative shown in the
image, followed by a rhyming couplet (dohā) that
summarizes the meaning of the musical phrase,
the poem, and the image. The text is written in
Malvī, a subdialect spoken in central India around
Bundelkhand.

Subject matter
Ragamala paintings draw from aspects of human experience in order to visualize specific moods, emotions, and qualities such as love, anguish, valor, weakness, and strength. A raga in Indian music is a melody consisting of a string of notes in a particular arrangement. Raginis are derivations from or variations of ragas in feminine mode (the basis of these classifications remains unexplained in many cases), and could have different or similar musical structures as ragas. Specific ragas are associated with specific times of the day, seasons, and emotions. When visualized, as here, ragas and raginis are meant to evoke the same affective responses that are allied to their musical modes. The text above the illustration refers to stories or incidents associated with the depicted raga/ ragini, but may not necessarily be narrative-like or descriptive. Drawn from literary tropes and tales that sophisticated writers and viewers would be aware of, the inscriptions are an integral part of the overall experience of this miniature painting. An illiterate viewer, however, could still enjoy the scene without reading the text.

Separated from her lover, the woman depicted here is sorrowful and meditates about him. Forest animals keep her quaint company in her loneliness. The garlands are perhaps meant for her lover, or could signify bounty and beauty, attributes that also apply to the woman herself. They are a standard feature of paintings depicting this ragini.

Physical Description
A woman stands in the center of the composition, with two peacocks shown on either side of her. She holds garlands and a flower in each of her hands. Monkeys and peacocks are seen in the trees, and two men appear near the top of a hill that frames the scene. They are pointing towards a pavilion located at the summit of the hill. Below the woman, lotuses and birds are depicted in the stream of water. The landscape is vibrant and abundant.

Rights
If you are interested in using an image for a publication, please visit http://umma.umich.edu/request-image for more information and to fill out the online Image Rights and Reproductions Request Form. Keywords
lady