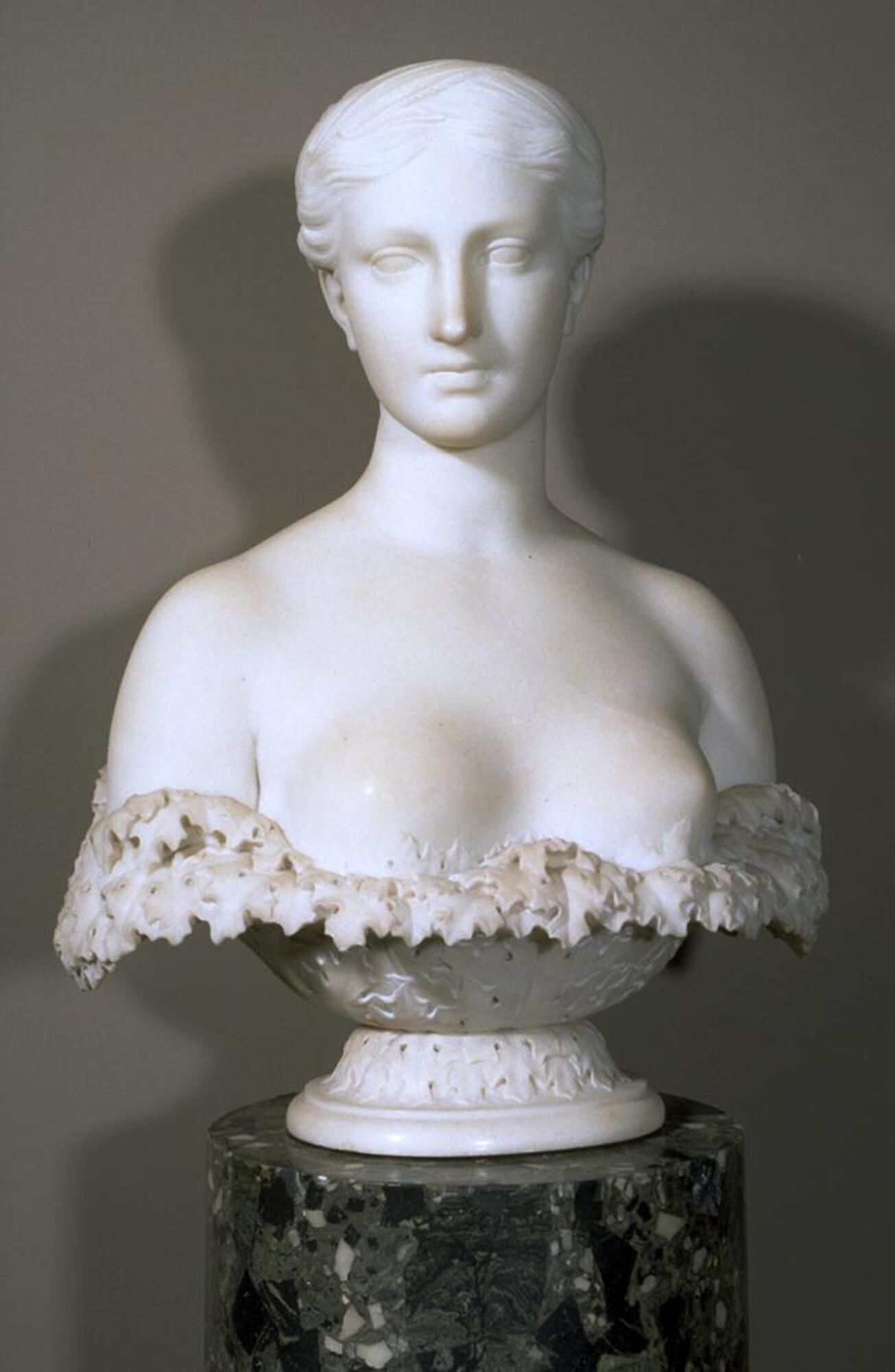 Label copy
March 28 2009
The ancient Roman myth of Proserpine (or Persephone), the subject of this bust, accounts for the origins of the seasons. It tells of how the beautiful daughter of Ceres, the goddess of agriculture, was abducted by Pluto, the lord of the underworld. Ceres was so distraught at her daughter’s absence that the earth ceased to be fruitful. Eventually Pluto allowed Proserpine to visit her grieving mother for six months of every year, during which time her mourning ceased and the earth bloomed. When Proserpine returned to Pluto, her mother’s grieving was renewed and the world was again dark.
The refinement of the features and the delicate translucency of the finish of Prosperine give it both a compelling psychological presence and a lifelike softness. Powers was both a master of the techniques of sculpture and an innovator of the materials and tools of sculpting. He developed a process for finishing the surface of his marble sculptures that gave them the likeness of living flesh. This was a hallmark of his work, one for which he received much public and critical acclaim. Powers was a very successful sculptor, and his exquisite rendition of Proserpine was one of his most popular busts; he made several versions of it, from which more than one hundred replicas were cut.

Subject matter
A Neoclassical sculptor, Hiram Powers is best known for his ability to render the soft, life-like quality of flesh in stone, and his insistence on using only the best, nearly flawless marble in his sculptures.
Powers based the subject of this piece on the Roman mythological story of Proserpine (the Roman equivalent of the Greek goddess Persephone), in which the beautiful Proserpine, daughter of the goddess of agriculture, Ceres, was abducted by the god of the underworld, Pluto. She was allowed to return to her grieving mother for six months of the year, thus explaining the cycle of the seasons: during the spring and summer Proserpine was with her mother and the earth bloomed, during the fall and winter she was forced to be Pluto’s consort and earth fell into mourning.

Physical Description
Bust-length white marble sculpture of a young female figure crowned with a plait of wheat and framed along the bottom with a wreath of sculpted acanthus leaves.