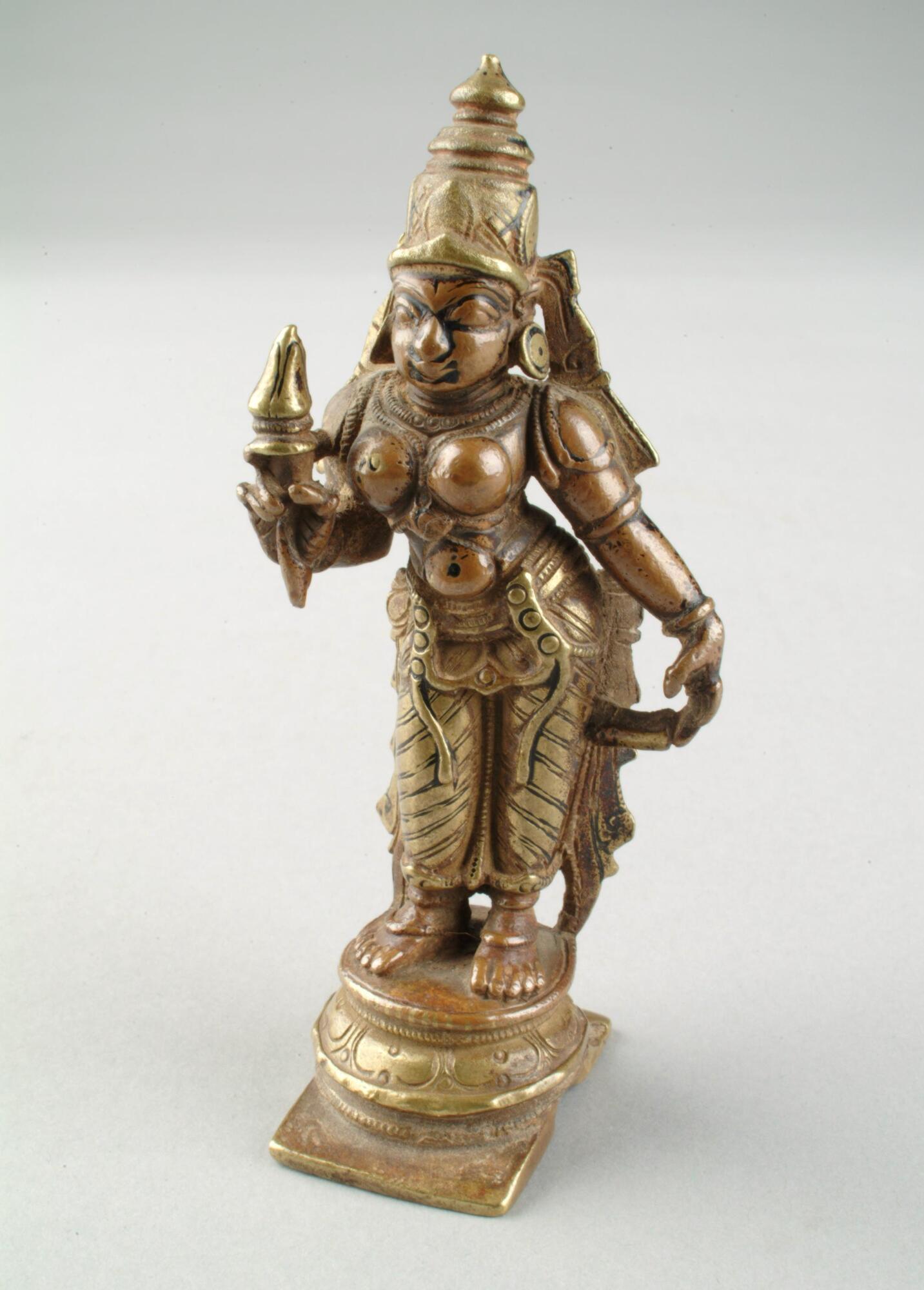 Label copy
March 28, 2009
Vishnu’s second consort is Bhu Devi, who personifies the earth rescued by Vishnu in his incarnation as Varaha. She is often shown in miniature form in sculptures that represent Varaha’s heroic act (also seen in this gallery), but in this group she is brought to scale with Vishnu in her role as a divine lover. Bronze images of consorts emerged in full glory in the tenth century, when they were cast according to rules that dictated their attributes, proportions, and curvature. Mirroring the form of Shri Devi, Bhu is shown in tribhanga, or triple-bent pose, with her weight carried on one leg and hip flexed, causing her body to tilt severely in the opposite direction. While her head remains straight, the goddess’s left arm rises and curls in response to her shifting weight. Her torso leans toward Vishnu’s straight form, while her pendant arm marks the boundaries of their intimate space.
(Label for UMMA South and Southeast Asia Gallery Opening Rotation, March 2009)

Subject matter
Two goddesses often flank the god Vishnu. They go by a variety of names, but the most common are Bhudevi and Shridevi. Essentially Bhudevi is the earth goddess and Shridevi represents Lakshmi the goddess of fortune. There are generically rendered, merely holing a flower of various kinds, usually the lotus, but sometimes the blue water lily.
Three bronzes form a group: Vishnu 1978/2.123, Bhudevi 1978/2.132 and Shridevi 1978/2.131

Physical Description
Bhudevi stands in a tribhanga pose (with three bends) with her left arm hanging pendant to her side and holding a lotus bud in her right hand. She leans towards the figure of Vishnu in the grouping of three bronzes. She stands on a base consisting of a flat square element topped with a series of five round rings. She wears a decorated lower garment flared out on either side in a pattern. She wears a decorated belt and necklaces, bracelets and armlets, with shoulder loops, earrings and a crown. The jewelry and crown is highlighted with gold paint as is his clothing and the two attributes. She does not wear a band across her breasts, as does Shridevi in groupings with Vishnu and Bhudevi.