Grand Interior View of a Courtesan House in the Yoshiwara District (Yoshiwara o-magaki no zu, one of pentaptych) 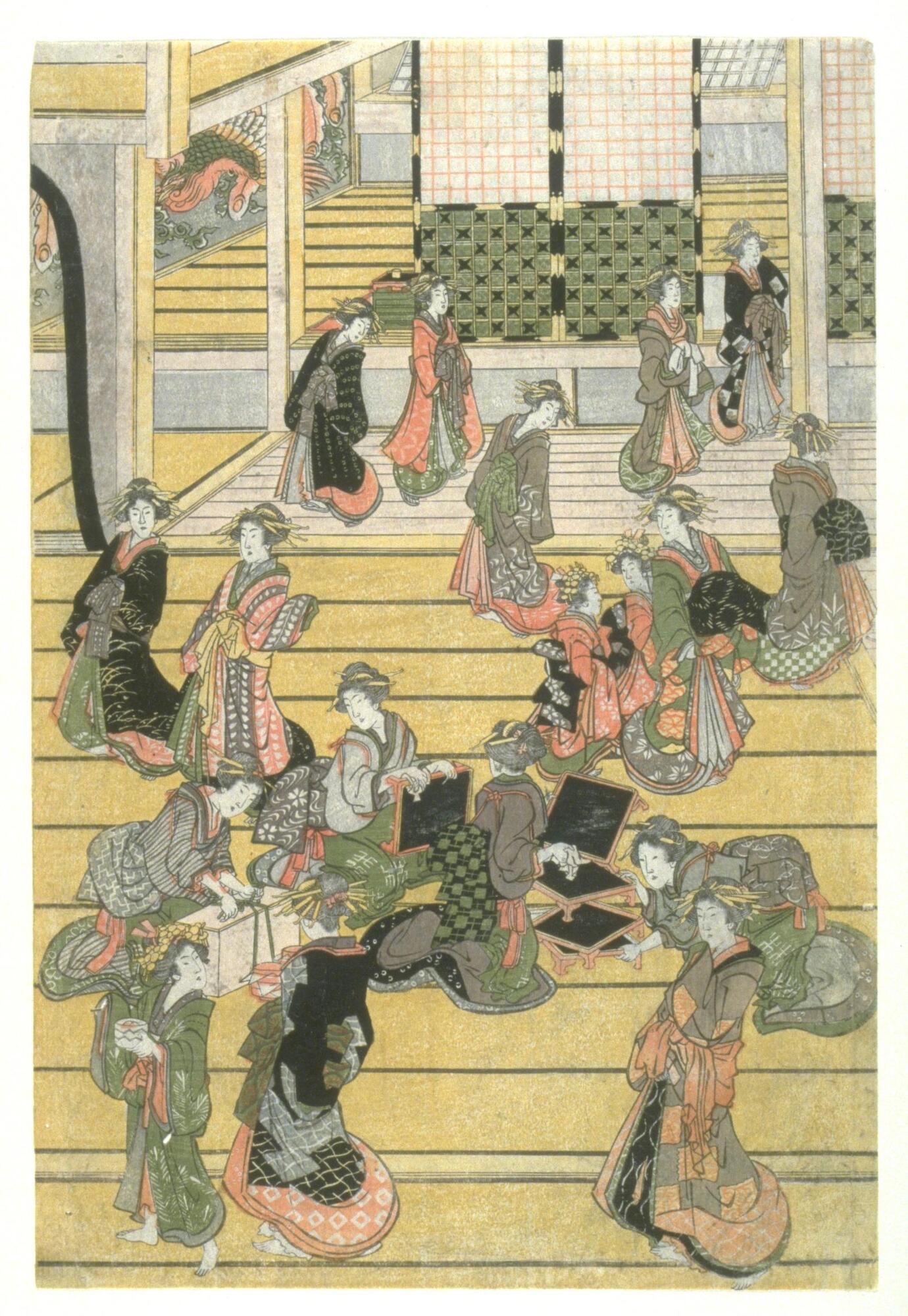 Title
Grand Interior View of a Courtesan House in the Yoshiwara District (Yoshiwara o-magaki no zu, one of pentaptych)

Label copy
Gallery Rotation Fall 2013
Katsushika Hokusai
Japan, 1760–1849
Grand Interior View of a
Courtesan House in the
Yoshiwara District
Edo period (1615–1868)
circa 1811–13
Color woodblock print on paper
Museum purchase, 1938.1–3
These three prints belong to a series of five showing the interior of a bustling brothel in Yoshiwara, the licensed red-light district in Edo (modern day Tokyo). The space is filled with ostentatiously dressed courtesans, with a plethora of hair accessories, gorgeous robes, and obi (sash). In between the courtesans and their young attendants (kamuro), male and female servants are busy with their chores, as if the brothel were soon to open to customers. Interior elements such as sliding doors with intricate wood panels, impeccably clean tatami mats, and the luxurious painting of a phoenix in the back suggest that this brothel caters to sophisticated and wealthy clients.
These prints were produced in the early years of Hokusai’s long career. Although his brilliant design sense is not so much in evidence here, his meticulous attention to details is apparent: male servants blow air into the stove’s furnace while courtesans touch-up their make-up and female servants wipe dust off the footed trays.

Subject matter
The image shows a group of courtesans and their servants and assistants in a brothel in Yoshiwara preparing to open. Female servants in the image wipe off dust from small footed trays while the courtesans walk about. The intricate wood details and the image of the phoenix in the back impy that this house caters to wealthy clients. This print is from a series of five.

Physical Description
A group of 18 women inside a building wearing various kimono with the predominant colors being grey, red, black, and green. Some of the kimono also have orange coloring. The patterns and designs on the kimono vary from images of flowers to geometric designs. A rice paper door is seen in the background leading to a room at a slightly higher level and an image of a phoenix can be partially seen on the wall in the back and to the left. One of the women near the front is tying the string around a package while three other women near her are arranging small footed trays. One of the women in the forefront and to the left appears to be holding a cup or jar.