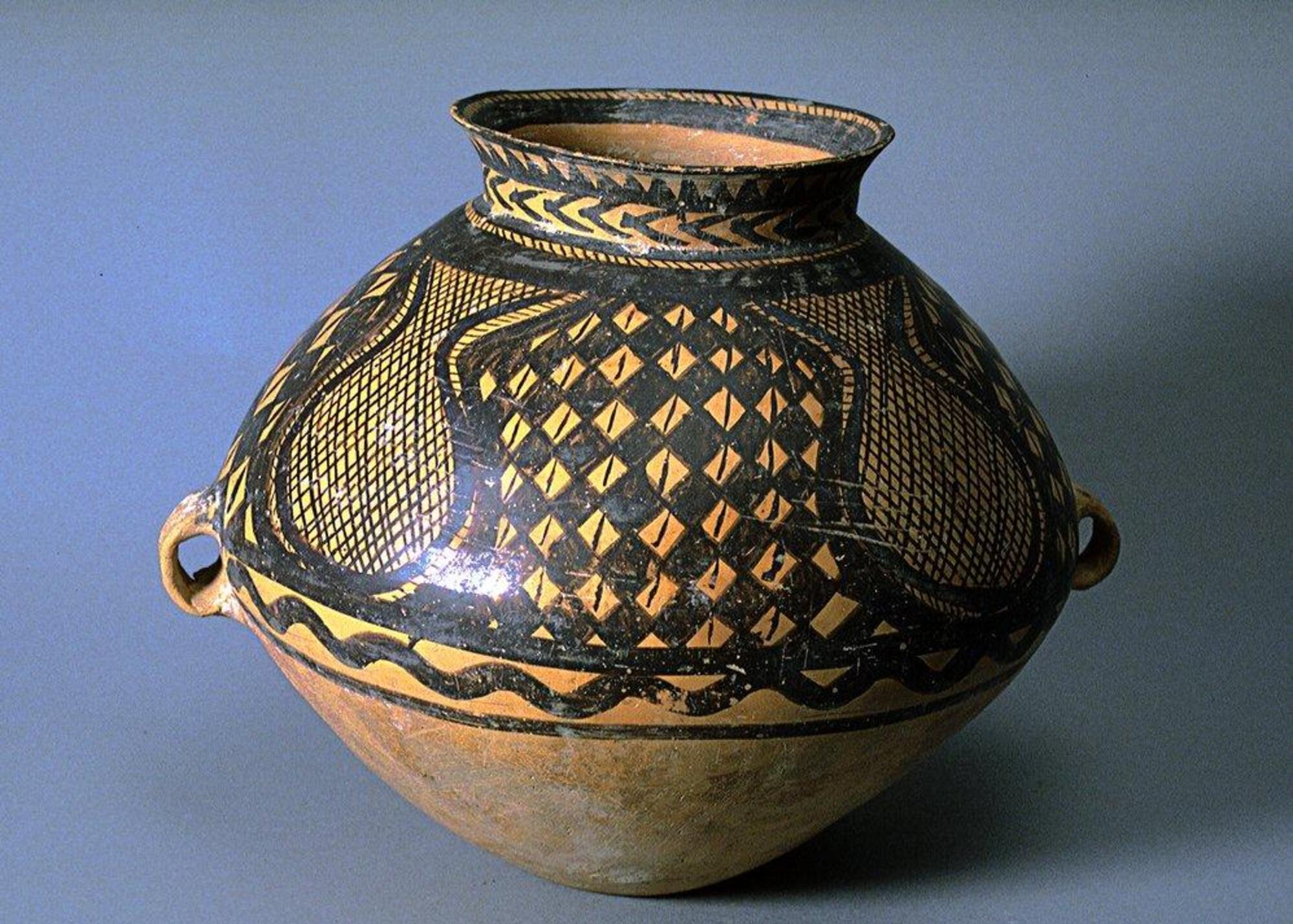 Subject matter
A mortuary urn or guan (罐) jar of the Neolithic Banshan phase (2600 BCE-2300 BCE) of Majiayao Culture from Banshan, Gansu of the Yellow River Valley. Discovered by Johan Gunnar Andersson in 1921, by the 1980s approximately 60,000 items and 400 kilns had been discovered at Majiayao sites (He Li 1996, 22). They were found in subterranean graves with conical bases placed into the local loess soil, and because the decoration is consistently only on the top portion of the jar, it can be assumed they were meant to be viewed from above.  Decorations of four gourd-shapes such as this were amongst the eight most common decorations found on guan  at the Banshan site. While it is impossible to know the meaning behind this decoration, researchers suggest perhaps this pattern represents swirling water. They interpret the the network patterns to represent fishing nets and a major source of food supplied by the Yellow River. The two lug handles were probably used to tie down a wooden, or other decomposable material, lid. An abundance of this type of guan were made with similar proportions, which suggests the use of a mathematical module, standardization, assembly line style mass production and the possible division of labor during the Neolithic period (Poor 1995, 166).

Physical Description
A light reddish-buff earthenware guan (罐) jar with a wide globular upper body and conical lower body on a narrow flat base, a tall wide neck and a flaring rim. Two diametrically opposed lug handles are located at the waist. The upper half of the body is painted with black pigment to depict four gourd-shaped areas containing a network pattern. The negative space between the gourd-shaped areas contains a checkerboard pattern confined between solid band borders, with a lobed line border below, and one final solid black band at the bottom of the design. Around the neck are bands of herring bone, sawtooth, and hatch mark patterns, and additional hatch marks and solid bands toward the interior.

Rights
If you are interested in using an image for a publication, please visit http://umma.umich.edu/request-image for more information and to fill out the online Image Rights and Reproductions Request Form. Keywords
Banshan
Majiayao
earthenware
grave goods
jars