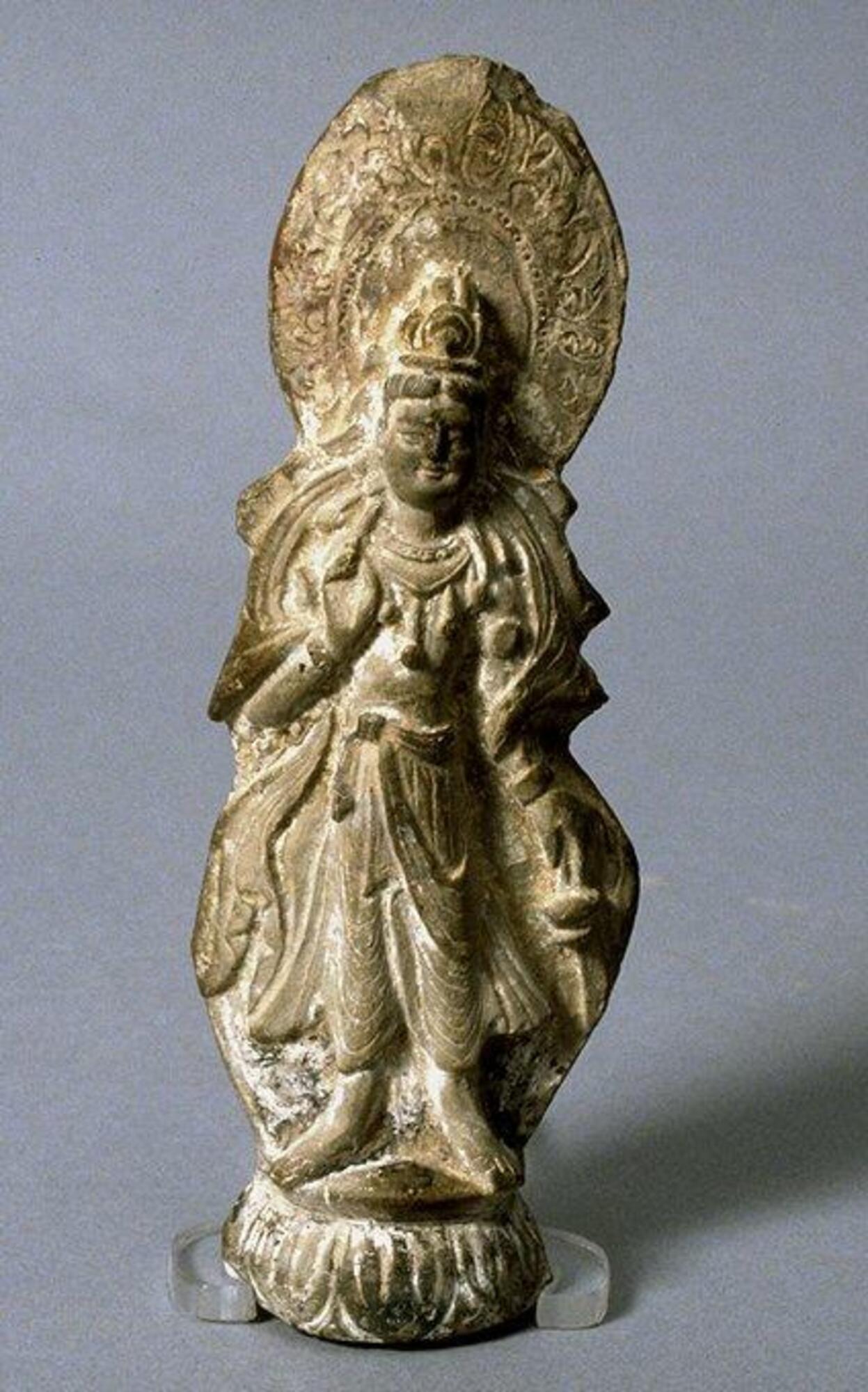 Label copy
The right hand of this molded figure is in the symbolic "abhaya", or protection gesture. He holds a flask, filled with the elixir of immortality, in his left hand. Buddhism renounces all worldly goods, but the images of "bodhisattvas" represent princely followers of Buddha. They may even wear jewelry, as in this example.

Subject matter
"In Chinese Buddhism, Guan Yin is synonymous with the Bodhisattva Avalokitesvara, the pinnacle of mercy, compassion, kindness and love.
Along with Buddhism, Guan Yin's veneration was introduced into China as early as the 1st century AD, and reached Japan by way of Korea soon after Buddhism was first introduced into the country from the mid-7th century.
Representations of the Bodhisattva in China prior to the Song Dynasty (960-1279 AD, Northern - and Southern Song Dynasty) were masculine in appearance.
It is generally accepted that Guan Yin originated as the Sanskrit Avalokitesvara, which is her male form, since all representations of Bodhisattva were masculine.
Later images might show female and male attributes, since a Bodhisattva, in accordance with the Lotus Sutra, has the magical power to transform the body in any form required to relieve suffering, so that Guan Yin is neither woman nor man. In Mahayana Buddhism, to which Chinese Buddhism belongs, gender is no obstacle to Enlightenment.
As the Lotus Sutra relates, the Bodhisattva Kuan Shih Yin, "by resort to a variety of shapes, travels in the world, conveying the beings to salvation."
The representation in China was further interpreted in an all-female form around the 12th century, during the Ming Dynasty (1368- 1644 AD).
In the modern period, Guan Yin is most often represented as a beautiful, white-robed woman, a depiction which derives from the earlier Pandaravasini form.

Rights
If you are interested in using an image for a publication, please visit http://umma.umich.edu/request-image for more information and to fill out the online Image Rights and Reproductions Request Form. Keywords
Buddhism
bodhisattva
sculpture
sculpture (visual works)