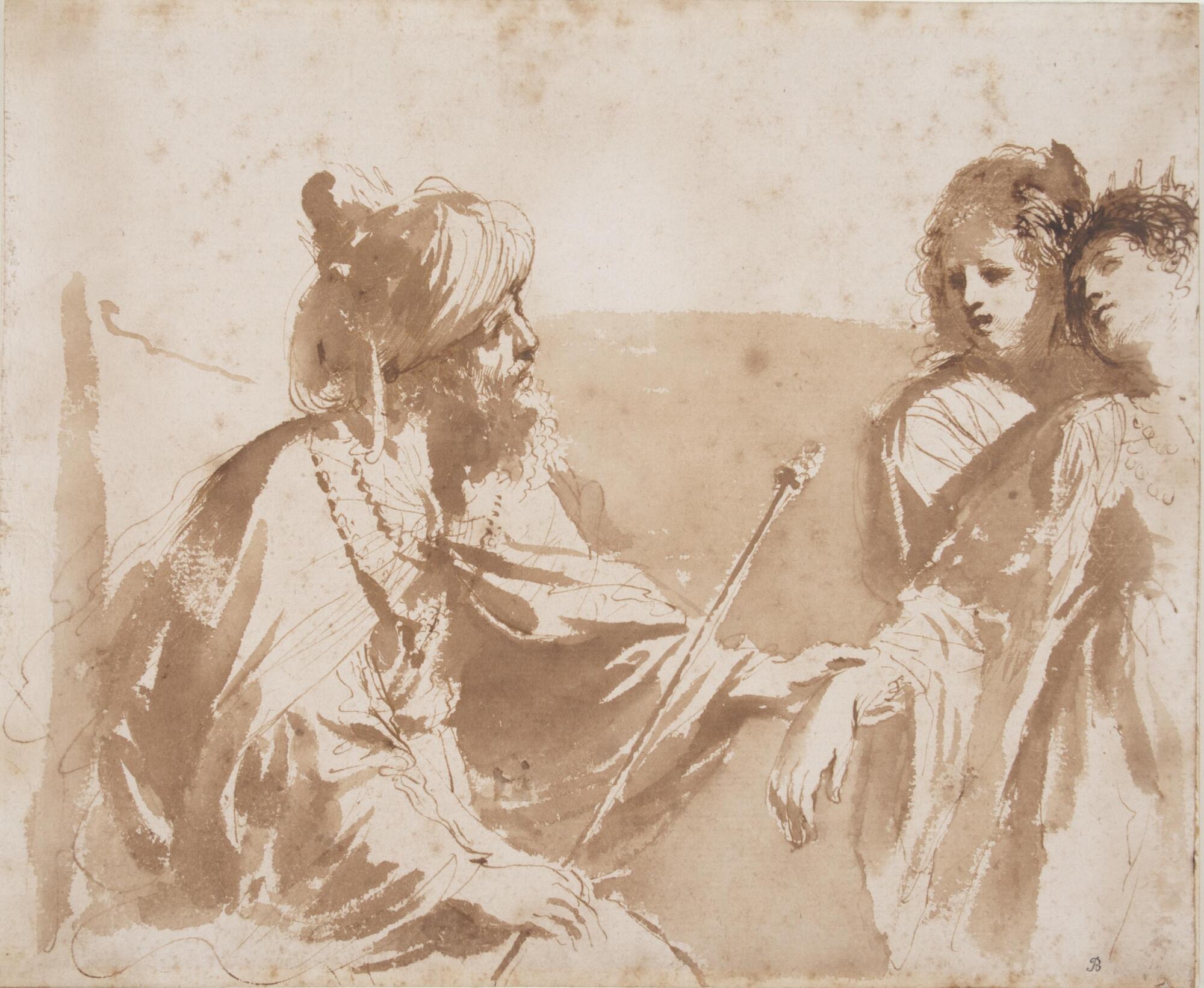 Label copy
March 28, 2009
Guercino was a prolific draftsman whose drawings have been eagerly collected for three hundred years. UMMA is fortunate to have two preparatory drawings by Guercino made for the Museum’s painting, Esther before Ahasuerus, hanging nearby. It was common practice at the time for artists to make studies of drapery, poses, and other details as they were considering the various elements of a large or important work. Such is the case with the Museum’s painting: Guercino used drawings as a way to work through problems before he ever picked up a paintbrush.
There are numerous preparatory drawings for our painting; two here show the different ways Guercino approached the complex relationship between Esther and her husband, King Ahasuerus. The smaller drawing is, in essence, a rapid compositional exploration of the moment when Esther faints in distress as she defies the ban on approaching the king without invitation. In this drawing, her head turns away from Ahasuerus. Perhaps Guercino felt that in this pose she recoiled too strongly from the king because he changed the position of Esther’s head in the final work. The larger drawing, a more distilled examination of the principal figures, employs wash to subtly indicate their psychological state of mind. Here, Esther inclines her head toward Ahasuerus—which she does in the final painting—as the king reaches towards Esther in a gesture of both official clemency and private concern. However, in the final painting, Guercino eliminates the king’s tender motion of taking her hand; his more formal gesture of raising his scepter towards her reverts back to the pose of the smaller, and probably earlier, drawing. How carefully Guercino weighs and considers each figure’s gestures is evident in the drawings and allows viewers to step into Guercino’s creative process. They also exemplify Guercino’s superb versatility as a draftsman; the summary sweeps and loops of his reed pen in the smaller drawing, particularly evident in the lower portions of the drapery, convey agitated motion absent in the final painting, whereas the use of ink wash to denote shading and mass in the larger study indicates that Guercino was focusing on the more subtle connections between the king and queen.
The final painting moved through distinguished collections in both Italy, where it belonged to Pope Urban VIII and other members of the Barberini family, and then became part of the collection of the Dukes of Northumberland. British engraver Robert Strange traveled to Italy during the 1760s and is believed to have seen the Museum’s painting of Esther before Ahasuerus when it still resided in the Palazzo Barberini, in Rome.

Subject matter
Derived from the Old Testament story of the Jewish heroine, Esther, Guercino depicts the dramatic moment when Esther enters the king's presence unbidden and faints in distress. Although she is his queen, no one may approach the king without his permission.
The Museum of Art is fortunate to have two preparatory drawings for the Guercino painting of "Esther Before Ahasuerus" (the other is 2008/1.161). In this work, Guercino is exploring the psychological relationships between the principal figures: Ahasuerus, his queen Esther, and one of two attendants who support the queen. Between these two studies, it is possible to examine Guercino's process of arriving at his final composition. This sheet carefully explores the responses of the three figures, concentrating on the gesture of clemency as Ahasuerus reaches out to Esther with both his scepter and, in more personal concern, with his hand.

Physical Description
A seated king, at the left, holds the hand of a swooning woman who is supported by another woman. The supporting woman looks back at the king.