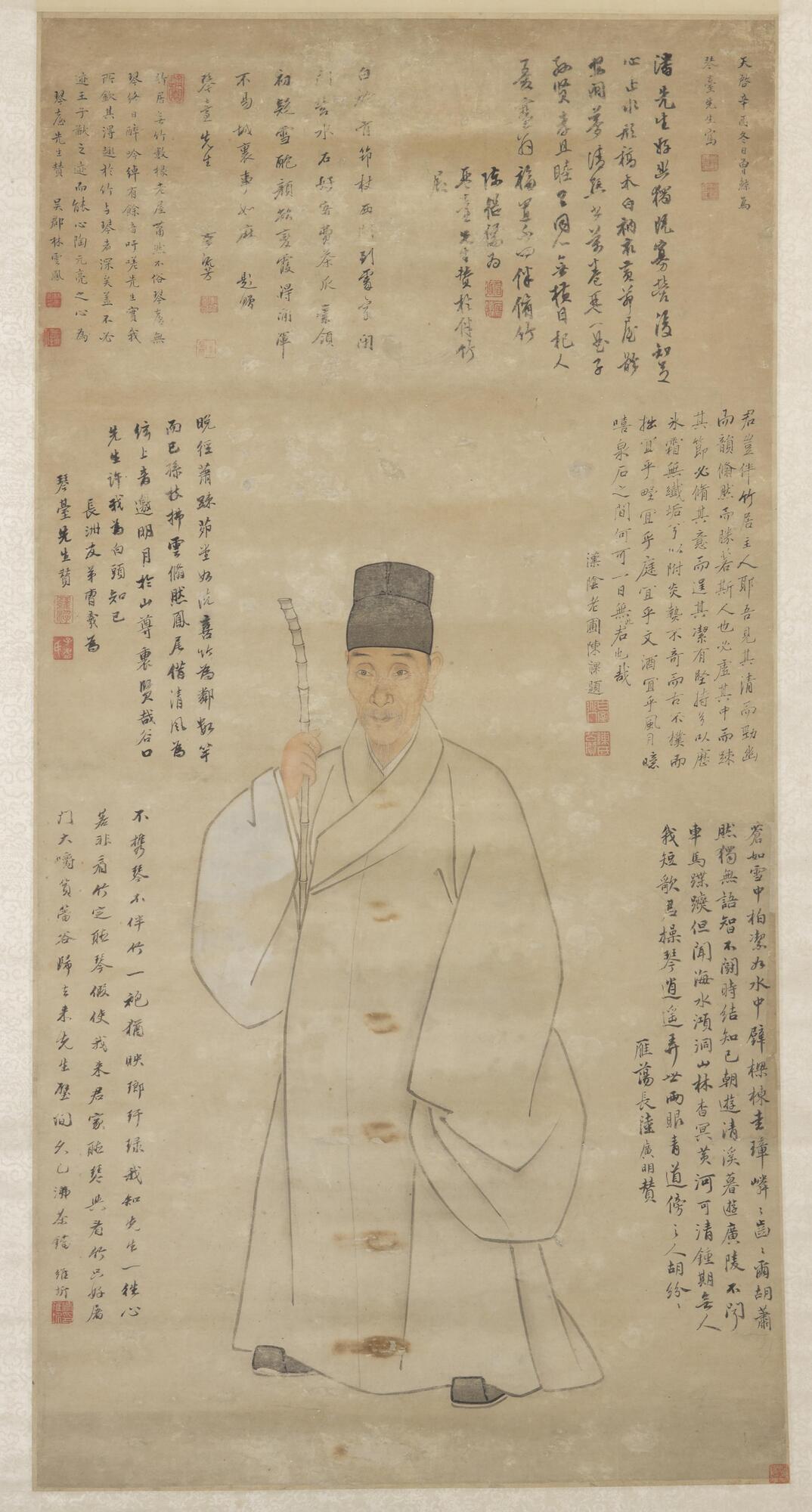 Label copy
Zeng Jing’s work marks the rise of informal portraits of contemporary figures in Chinese painting. The subject is Pan Qintai, a late Ming dynasty scholar-recluse from Suzhou admired by many of the artist’s contemporaries. Pan is shown in his early sixties, with a lean face, discerning eyes, and a subtle smile. His bamboo staff, unadorned hat, long cotton robe, and sandals reference famous historical figures who embodied the reclusive ideal. The details of this realistic portrayal are oncentrated in the face, where gradations of ink wash are used to suggest Pan’s deep-set eyes and the volume of his nose and forehead. The inscriptions on the painting are words of praise from Pan’s friends and admirers, including renowned scholars and artists of the late Ming dynasty. These inscriptions extol Pan’s elegant taste, artistic achievement, and rustic life. In the upper right corner, next to the artist’s inscription, the famous literati (amateur scholar-artist) painter Chen Jiru (1558–1639)
noted: “His mind is peaceful and relaxed, his sleep deep and sound. He owns a thousand books as well as a zither.” In extolling Pan’s cultivation and way of life, likeminded scholars expressed their common ideals.
From Spring/Summer 2015 Gallery Rotation
--------
Inscription: On a winter day in 1621, during the Tianji era, Zeng Jing painted [this] for Mr. Qintai.
Two seals of the artist
Seven colophons, with accompanying seals, of contemporary scholars and artists
In 1621, Zeng Jing, the most famous portrait painter in Chinese history, completed this portrait of Pan Qintai, a scholar from Suzhou admired by many seventeenth-century contemporaries, as their numerous inscriptions reveal. Unlike the typical works of figure painters of the period, the facial features are individualized, presumably the result of the artist’s studied observation. Some art historians believe that Zeng Jing may have been influenced by exposure to Western portraiture that had been imported into China in the sixteenth century by Italian Jesuits.
Although portraiture had a place in Chinese art at least as far back as the second century, it lacked the status of landscape painting. One man—the artist of this painting, Zeng Jing—did more than any other figure in history to elevate the status of portraiture. His works were the first to persuasively capture both the contours of an individual face as well as an elusive sense of the sitter’s interior life. Zeng Jing used delicately drawn light lines and subtle washes—near transparent layers of color—to define the features of the subject, Pan Qintai, a scholar from Suzhou, for whom this portrait was made.
The many inscriptions on the painting are words of praise for Pan by his contemporaries and admirers and further define the sitter’s character, complementing the visual portrait
with verbal tributes to his interests and nature. In describing his cultivation and way of life as an educated man, they honor the literary and artistic ideals and values of the time. However, the presence of these inscriptions by famous scholar-artists equally attest to their regard for the painter.
One of colophons composed by Che’en Chi-ju (1558-1639) reads:
Mr. P’an, remote, is full of solitude.
Never seeking wealth, he is always content.
His heart is still like water, his body lean as arid wood.
He wears white cotton robes and dwells in a yellow thatched hut.
His mind is peaceful and relaxed, his sleep deep and sound. He owns a thousand books as well as a ch’in (zither).
His fine sons and grandsons are amiable and filial.
(Label for UMMA Chinese Gallery Opening Rotation, March 2009)

Subject matter
In 1621, Zeng Jing, the most famous portrait painter in Chinese history, completed this portrait of Pan Qintai, a scholar from Suzhou admired by many seventeenth-century contemporaries.

Physical Description
Painting of a standing male figure facing forward and holding a walking stick, against a blank background surrounded by an inscription, two artist’s seals, seven colophons and accompanying seals of contemporary scholars and artists.