In 2013, artist Ernestine Ruben (BSDEs ’53) photographed the once-famed industrial complex Willow Run in Washtenaw County, Michigan. Designed by her grandfather, Detroit architect Albert Kahn, for the Ford Motor Company, Willow Run was an exemplar of American defense manufacturing because of its efficient mass production of B-24 Liberators during World War II.

For this exhibition, Ruben overlaid interior views of the now-dormant factory with imagined glimpses into her body’s interior landscape. The resulting compositions seem to breathe energy and light into the stagnant and cavernous spaces of Willow Run and suggest a longing for a productive existence undeterred by mortality for both Willow Run and the artist. Her grandfather’s role in the history of the site underscores Ruben’s personal connection.

The exhibition presents Ruben’s photographs of Willow Run in UMMA’s Photography Gallery and an original film—co-created by Ruben and video artist Seth Bernstein and featuring an original score by award-winning composer Stephen Hartke—in the Museum’s Forum.

Lead support for Ernestine Ruben at Willow Run: Mobilizing Memory is provided by the University of Michigan Office of the Provost and the Herbert W. and Susan L. Johe Endowment. 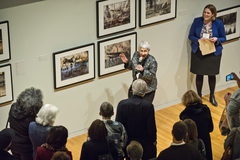 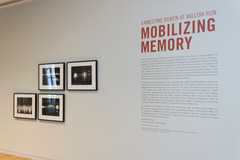 John M Turner
Other Resources by this Author