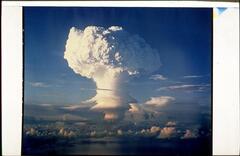 On August 6, 1945, the United States became the only nation to use nuclear weapons against a human target. Conversely, on the same day, Japan became the only nation to be the target of a nuclear attack. Since then, nuclear power--whether in the form of bombs and missiles or as a source of energy--has played a deeply controversial role in modern world history. Post-World War II narratives of American military ascendancy become problematic in view of accounts of generations of Japanese citizens whose lives were brought to an end or irrevocably harmed by the 1945 bombings, while the promises of nuclear energy are tempered by the terrifying examples of Chernobyl and Fukushima.

In a 1952 aerial image by an unknown photographer, a large, bright-white plume of smoke and vapor dominates the vast and vibrant blue sky and dwarfs the surrounding natural clouds. From a high vantage point, the photographer represents the grand visual effect of the characteristic mushroom-shaped cloud formed after the first hydrogen-bomb test, named “Ivy Mike.” Photographed seconds after the initial explosion, the viewer is witness to the impressive scope of the bomb’s destructive force. This image, along with  film footage created at the time (much of which has been recently declassified; see YouTube link above), was promoted by the U.S. government as proof of a thrilling advancement to the country’s nuclear capabilities during the early years of the Cold War (1947–91)—a period of escalating global tensions. While the scene represents the sublime power of manmade technology, the physical destruction wrought on the landscape beneath the bomb and the potential for human annihilation remain unseen in this explosive image.

Later photographers Richard Misrach and Patrick Nagatani engage with the United States' troubling history with nuclear power as they present the vast and sprawling desert landscape of New Mexico as a site of destructive uranium mining in the American southwest. Misrach’s triptych represents Shiprock—a striking geological formation and Navajo sacred site—three times over the course of a single day. The repetition of the scene emphasizes the passage of time, from the relatively recent destruction of the land and its effects on the native Navajo peoples to the perceived timelessness of this geographical site. Photographed only a few years later, Nagatani’s image similarly frames a desert scene yet includes a more direct reference to the demise of indigenous peoples: a cemetery at the Laguna Pueblo Reservation. Nagatani—whose parents were held in internment camps in the United States during World War II—pointedly overlays an image of celebratory carp streamers by Japanese artist Utagawa Hiroshige (1797–1858). The final montaged image addresses both the discriminatory experiences of Japanese Americans in the United States and the dangerous e ects of global nuclear development.

Sean Joseph Kramer
Other Resources by this Author