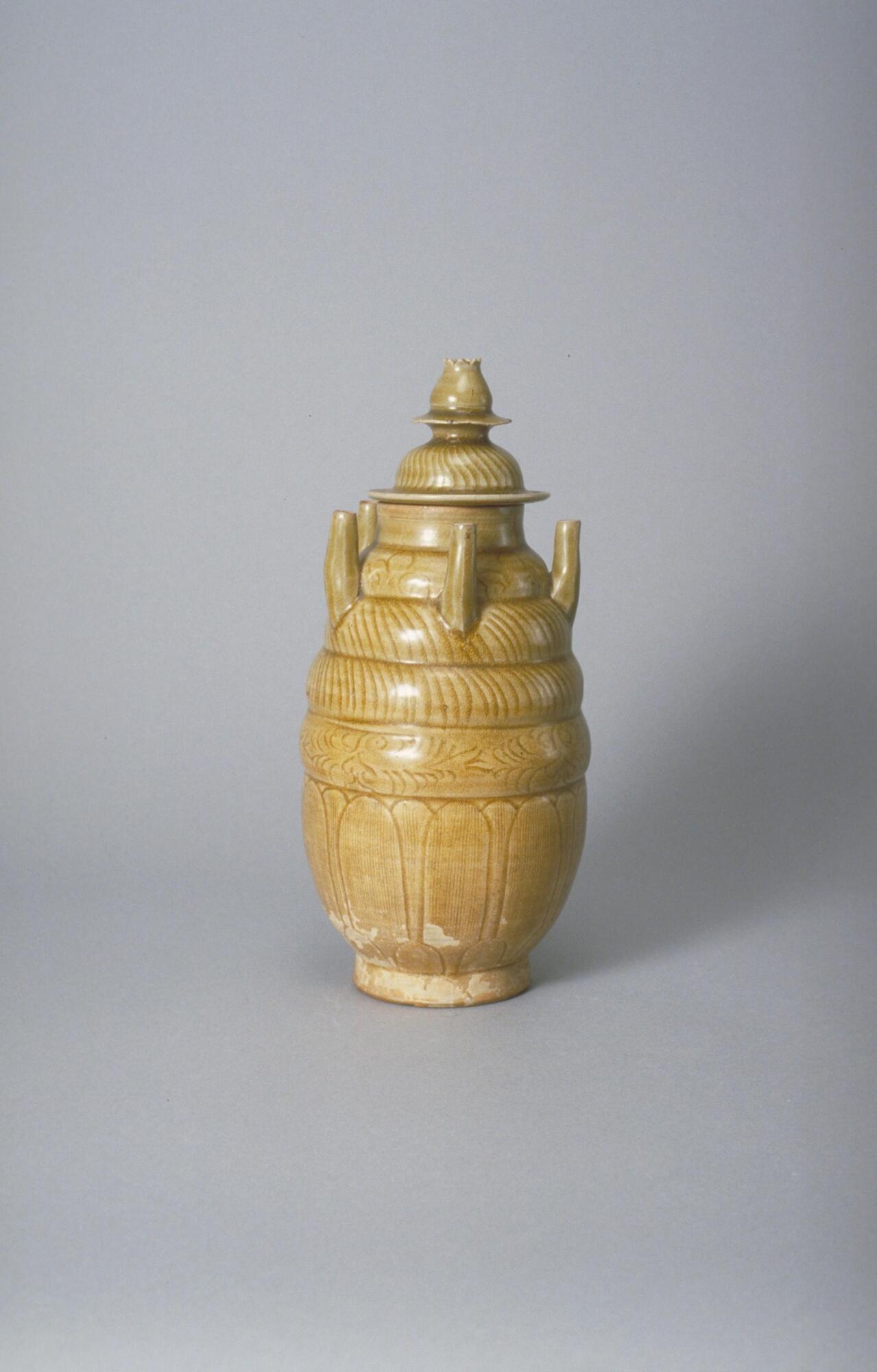 Label copy
Funerary jars or urns such as this one are thought to be associated with rites concerned with immortality, perhaps housing the spirit or soul of the departed in the manner of the hunping (jar for the soul) of the Western Jin dynasty (165–316) in the adjacent case. Some scholars speculate that the five false spouts allude to a Chinese phrase for abundant harvest (wugu fengdeng) and that such vessels were ritual containers for the Five Grains of China—wheat, rice, barley, maize, and sorghum.

Subject matter
This is a multi-tube covered vase or duo guan ping (多管瓶) in the form of a lotus bud. Despite being a funerary jar, it is assumed that vessels of this form were used as drinking vessels by farmers. In this context, the five spouts may allude to the Chinese saying "wugu fengdeng (五穀豐登)", a wish for an abundance of the five crops of wheat, rice, barley, maize, and sorghum. Several of these vessels that have been found in tombs have fake spouts that are closed off where the spout attaches to the vessel.

Funerary jars or hunping (混瓶) were made to house the spirit of the deceased as it left the body, and the form of this jar, being a lotus flower, suggests the owner was a Buddhist. In Pure Land Buddhism, practitioners are reborn into Amitabha's Western Paradise through lotus buds. Even though Buddhists are often cremated, Chinese Buddhists often continued to adhere to traditional Chinese burial practices and rituals. This form was made in abundance by potters from Longquan during the 10th century, whose kilns are famous for celadon glazes.

Physical Description
This buff stoneware jar rises up from a tall foot ring in an elongated globular body with lobes tapering towards the mouth. It has incised decoration and five tubes evenly spaced, protruding upwards from the shoulder. The mouth is covered with a high domed lid, incised, and topped with a lotus bud finial. It is covered in an olive green celadon glaze.

Rights
If you are interested in using an image for a publication, please visit http://umma.umich.edu/request-image for more information and to fill out the online Image Rights and Reproductions Request Form. Keywords
celadon (glaze)
ceramic (material)
grave goods
jars
stoneware (pottery)