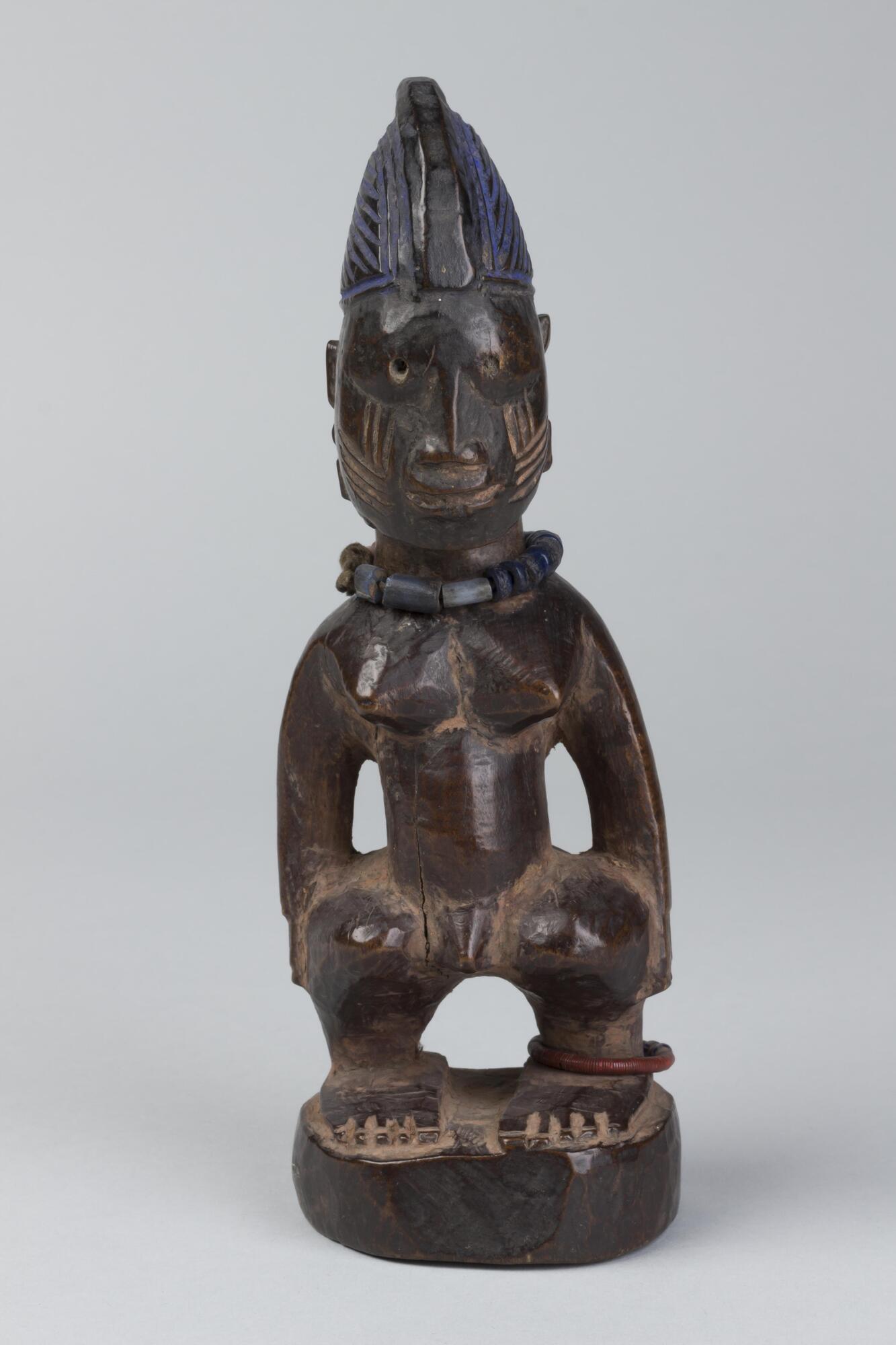 Label copy
The word "altar" or "shrine" in the Yoruba language means both "face of the gods" and "threshold to the gods". An altar is a locus of worship, a point of connection, and the place of the "in-between" where life and death converge and this world meets the one beyond. For genetic reasons, Yoruba have the highest twinning rate of any human population. They honor deceased twins with altars like the one reconstructed here. An altar is a living art form that must be fed and cared for by devotees who leave offerings of food and sacrificial gifts in adoration of the departed. Twins who die in infancy have Ibeji figures such as these carved in their honor. Bearing and nourishing newborn twins is physically difficult and dangerous to the health of both mother and nuslings, and many do perish. The hope is that by honoring a twin that dies, its other will survive and flourish.

Subject matter
Up until the 1980s, Ere ibeji were small figures used by Yoruba peoples in the worship of twins. This practice has largely been replaced by portraits and plastic dolls.

Twins are thought to be two bodies sharing one soul, so to placate as well as embody the spirit (emi), a figure (ere) would be carved to represent the deceased twin (ibeji). Yoruba peoples have the highest rate of twins per birth in the world, and in the past, high infant mortality meant many twin figures were carved. The ere ibeji was treated as a living person, regularly fed, washed, clothed, and carried. As a center of this ritual activity, these twin figures transformed from a memorial to an embodiment of the deceased twin that allowed them to be present to the living.

In addition to housing the spirit of a deceased twin, ere ibeji also represented the Yoruba ideal of good character. Part of what constitutes good character is a sense of composure or ‘coolness’, called itutu. Many aspects of ere ibeji embody this sense of ‘coolness:’ The calm face with serious, sealed lips and a poised stance with hands at the sides is a position of spiritual alertness that reflects ‘coolness’ and thus, good character. After being carved, the head of the twin figure would be rubbed with an indigo dyed cloth and some hairstyles/headgear were painted with blue pigment, as blue is the color of ‘coolness’.

Twins are also associated with Shango, the Yoruba orisa (or god) of thunder, and the protector of ibeji, as twins are called “children of thunder.” Some aspects of ere ibeji reference Shango, such as the rubbing of the twin figure with red camwood powder, as Shango is associated with the color red, and plaited hairstyles, as Shango is often depicted with plaited hair. The beads around the neck and waist of this ere ibeji may represent various orisas (gods) or ancestors worshipped by the family, whose lineage or place of origin may be referenced in the facial marks of the figure.

Physical Description
Standing human figure on a round base with hands at the sides. There is a metal loop around one ankle and a string of black beads around the neck. On each cheek are four horizontal marks topped by three vertical marks. The hair is in a conical shape with a raised central groove surrounded by diagonal lines on each side and coated with blue pigment.