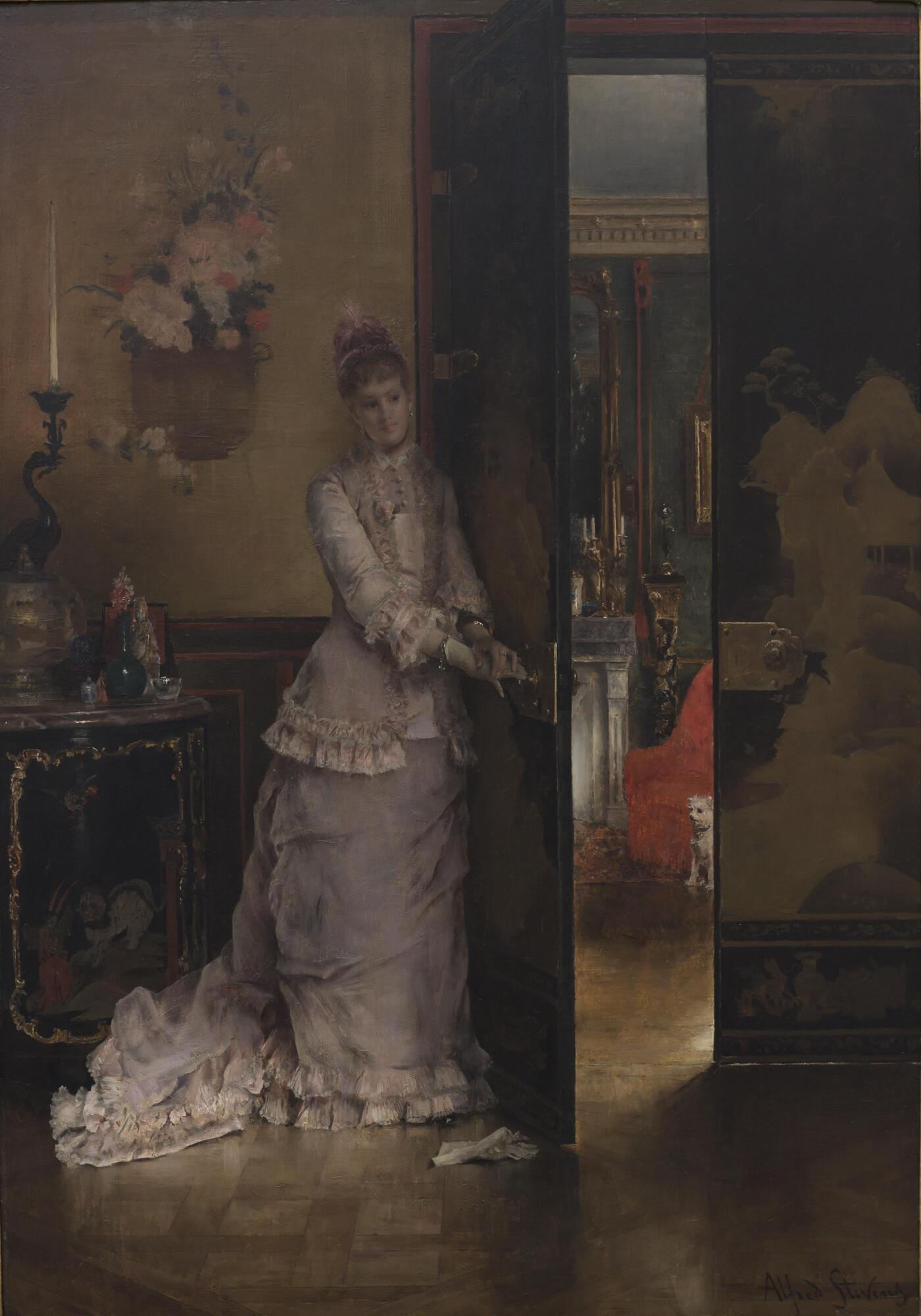 Label copy
March 28 2009
Alfred Stevens was a Belgian artist active in Paris who specialized in paintings of women in sumptuous surroundings; he frequently depicted the trials and disappointments of courtship in elegant society. The setting of Hide and Seek is Stevens’s own house in Paris, which was furnished with exotic lacquered doors and other luxurious items reputedly from the imperial palace in Beijing; these are characteristic of the taste for Chinese and Japanese art in fashionable circles at the time.
X-ray examination has revealed that Stevens experimented with the subject and composition of the painting. It seems he first painted a young girl standing in the doorway; she was subsequently painted over and replaced with a dog. With careful observation, the girl with her wide skirt is still discernable. The substitution of a dog for the girl, along with the woman’s absorbed expression and the glove dropped carelessly on the floor, suggest an intriguing narrative: the dog may be looking at a suitor in the next room with whom the woman is playing a game of hide and seek. In the tradition of seventeenth-century Dutch interior scenes, often used as models by nineteenth-century French painters, the playing of parlor games suggests a scene of seduction and reveals the painting’s erotic subtext.

Subject matter
The setting for “Cache-cache” is Stevens’ own Parisian house on the Rue de Martyrs. X-ray examination revealed that he first painted a young girl standing in the doorway, with whom the game of hide and seek is being played. She was subsequently painted over and a dog was painted in her stead, which enabled Stevens to concentrate on the perspective into the room beyond, the glove on the floor (indicating the haste with which the lady has entered the room), and it diminishes the potential human interest of the scene allowing the viewer to focus more fully on the beautiful rendering of objects and surfaces. The real subject of this painting therefore, is Stevens’ study of decorative objects and costumes and the play of light on their various surfaces, textures, and colors.

Physical Description
Panel painting depicting a young woman of high society in an interior setting filled with Asian accessories. She stands behind a door, which she holds partly open revealing a small white dog sitting in front of an armchair.