Two Courtesans with a Companion and Two kamuro, Sheet 3 from the series of "The Main Street of the Yoshiwara in Cherry Blossom Time" (A five-sheet series) 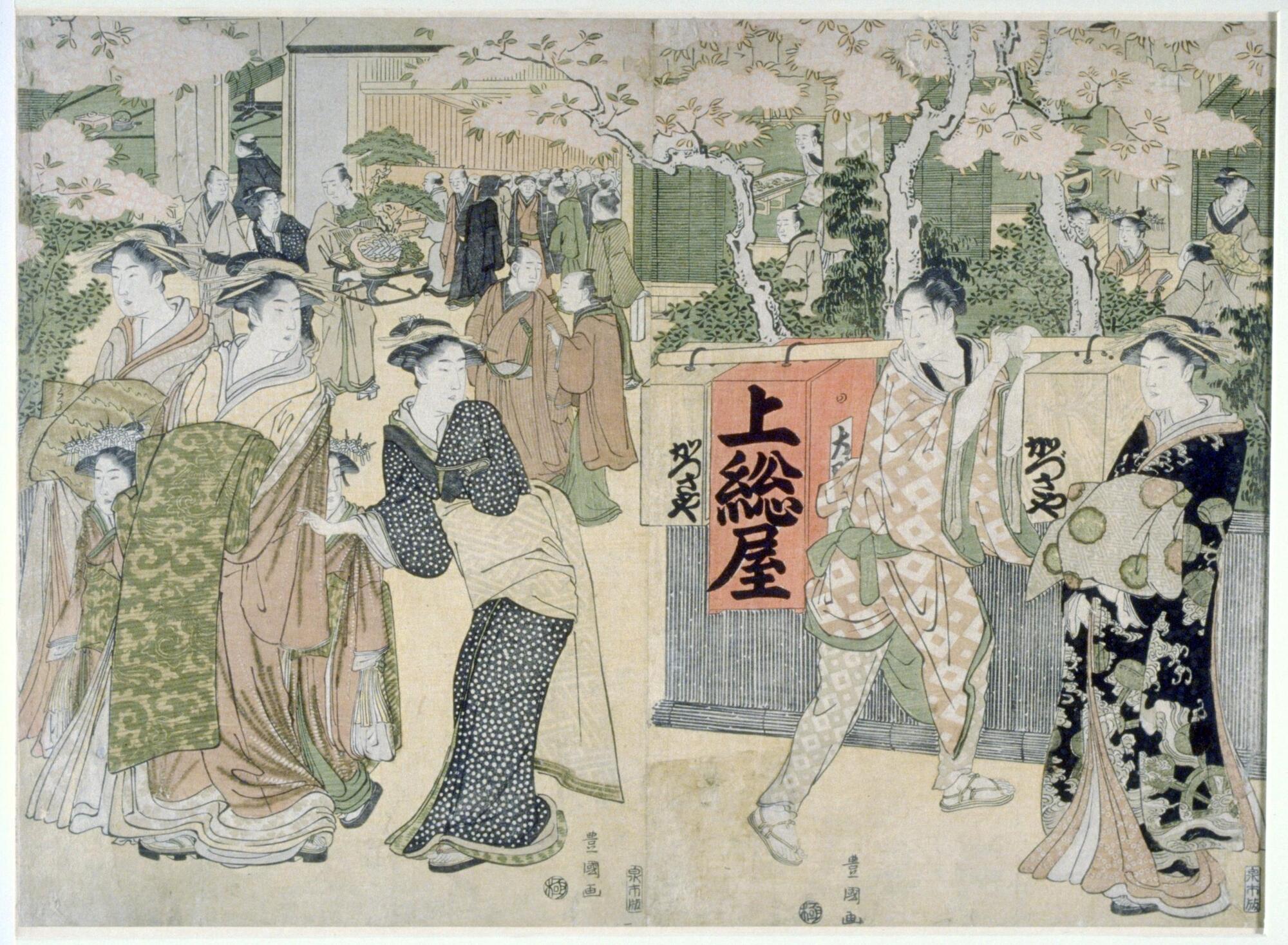 Title
Two Courtesans with a Companion and Two kamuro, Sheet 3 from the series of "The Main Street of the Yoshiwara in Cherry Blossom Time" (A five-sheet series)

Label copy
Gallery Rotation Summer 2013
Utagawa Toyokuni I
Japan, 1769–1825
The Main Street of the Yoshiwara in Cherry Blossom Time
Edo period (1615–1868)
Late 18th–early 19th century
Color woodblock print on paper, part of five prints
Bequest of Margaret Watson Parker, 1948/1.176–179
This beautiful panorama of courtesans and their male clients casually strolling under blossoming cherry trees depicts the hierarchical world of the Yoshiwara pleasure district courtesan. The woman near the center of the print has the highest rank. To her immediate left stands her junior apprentice (shinzô) and two child attendants (kamuro). The most simply dressed and coifed member of the group is the maid, who wears a simple black-and-white komon (small-pattern) kimono. The young man about to encounter the highest-ranking courtesan might be a present or future client. On the left, another group of women approaches, led by a slightly lower-ranked courtesan. The older woman (yarite) on the far left is a retired courtesan who trains younger women. A young man on the right is carrying boxes with the name Kazusaya, a popular brothel and possibly the one with which these courtesans are associated. In this sense the print also functions as an advertisement.
This is a relatively early print by Utagawa Toyokuni, from a phase in his career when he copied the style of Torii Kiyonaga (1752–1815), an influential print artist whose works are on view nearby. Indeed, without Toyokuni’s signature, one might easily mistake the proportions of the figures, their graceful interaction, and the convincing evocation of outdoor space as Kiyonaga’s work. However, in the fast-paced commercial world of print publishing in Edo (modern Tokyo), imitation bore no stigma; generation after generation of artists began their careers by working in whatever mode was currently most popular until they were successful enough to establish a distinctive artistic persona.