Visual Analysis of Portrait of Sacco and Vanzetti 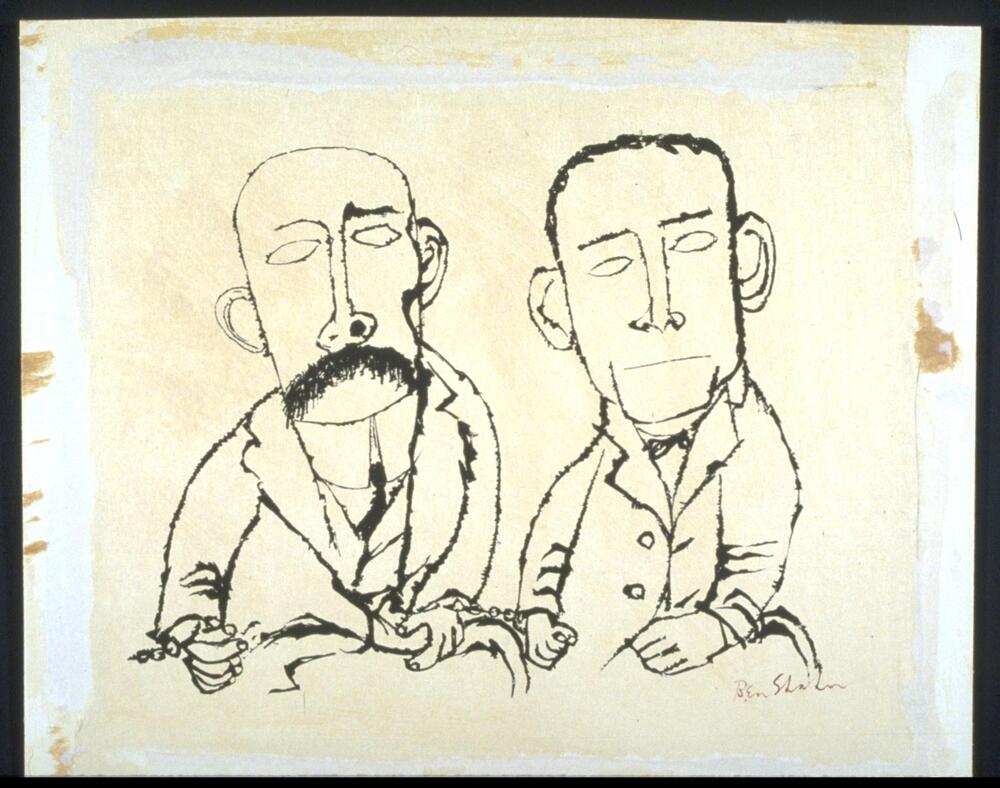 Shahn's 1958 print Portrait of Sacco and Vanzetti was reprinted many times, often as posters and other commercial outlets, in order to speak to ordinary American people. Shahn utilized distortion in this print to exaggerate the tragic plight of the handcuffed men and the absurdity of their execution. In all of his depictions of Sacco and Vanzetti, Shahn increased the scale of the figures in relation to the background and pushed them closer to the picture plane. Although his paintings and prints were based off of news photographs, by making these changes, Shahn made the figures more intimate and relatable to the viewers. Shahn tilted Sacco and Vanzetti's heads, distorted their proportions, and exaggerated their features to create a melancholic quality that made the two men more human and sympathetic. The heads of both men are inflated in comparison to their bodies, which draws attention to their blank eyes and expressions. The distortion of the subjects in the print evokes the sense that the two men were innocent, clueless characters as opposed to murderous criminals. In addition, since the only material utilized was black lines on paper, the print gives the impression of being a hurried, rough sketch. The lines are not smooth, and points on the same line vary in thickness to enhance this rushed feeling. The informality of the materials used gives the subjects in the print a colloquial, approachable appearance, such as what might be found in a cartoon strip instead of a harsh news photograph.

When discussing this subject with art critic Selden Rodman, Shahn recalled that in his depictions of Sacco and Vanzetti, "I was trying to take advantage of the spectator's existing feeling and set fire to that. I didn't try to convince Judge Thayer, or those who believed them guilty. But I do think that by presenting the two anarchists as the simple, gentle people they essentially were, I increased the conviction of those who believed them innocent."1 By presenting this tragedy in his artwork after the case was closed and the victims were dead, Shahn was not trying to change the opinions of his viewers, but rather draw attention to the injustice of the case through his distorted depictions of news photographs. Shahn's audience was primarily common people that could relate to American injustices and being treated unfairly, and with this print Shahn provided a platform for questioning American society.


Visual Analysis of Portrait of Sacco and Vanzetti

First Exhibition of Portrait of Sacco and Vanzetti

Shahn's returns to the Sacco and Vanzetti theme

Part of a Trio

Claire Elizabeth Yeamans
Other Resources by this Author