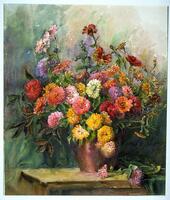 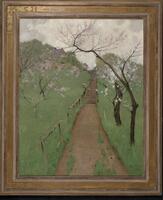 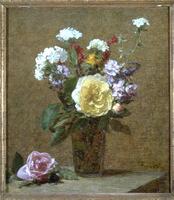 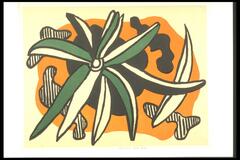 Label copy
Joan Mitchell’s art has been inspired not only by nature but also by literature. Her mother was a poet and editor for Poetry magazine, which published writers such as T.S. Eliot, whom Mitchell met and from whom she drew inspiration. Her father was a physician and life-long amateur artist. As a teenager, Mitchell spent summers in an art colony, which earned her credit at the Art Institute of Chicago.
In 1947, Mitchell moved to New York with the intent of studying with artist and teacher Hans Hoffman, but she was intimidated by his teaching methods. By the early 1950s, however, Mitchell was able to establish herself in the New York art world. Unlike the first generation of Abstract Expressionists, who were concerned with separating themselves from European influence and ideas, Mitchell moved to France and continued with her abstract mode of painting. She settled on property previously owned by Monet and was inspired by the same scenery.
The sunflowers that Mitchell had planted in her garden inspired Sunflower III, just one of a set of prints entitled Sunflower Series. Mitchell explained her attraction to sunflowers this way: "I don’t like fields of sunflowers. I like them alone or painted by van Gogh."
Jamina Ramírez, Intern for Modern and Contemporary Art, on the occasion of the exhibition The New York School: Abstract Expressionism and Beyond, July 20, 2002 – January 19, 2002

Subject matter
This print is part of a group of prints and paintings Mitchell made of sunflowers while living in Vétheuil, France. The flowers grew in her garden and she was also inspired by the sunflower series of Vincent Van Gogh.  As seen in this work, the expressionistic application of color and line reflect the way in which Mitchell related to her source of inspiration on an emotional level.

Physical Description
This abstract print has a large dark red and black circular form in the top half of the frame and a large orange and red circular form in lower half.  Black splotches and expressive lines dominate and overlap much of the image.