Mythological Figures from the Judgment of Paris: Juno, no. 1 out of a series of 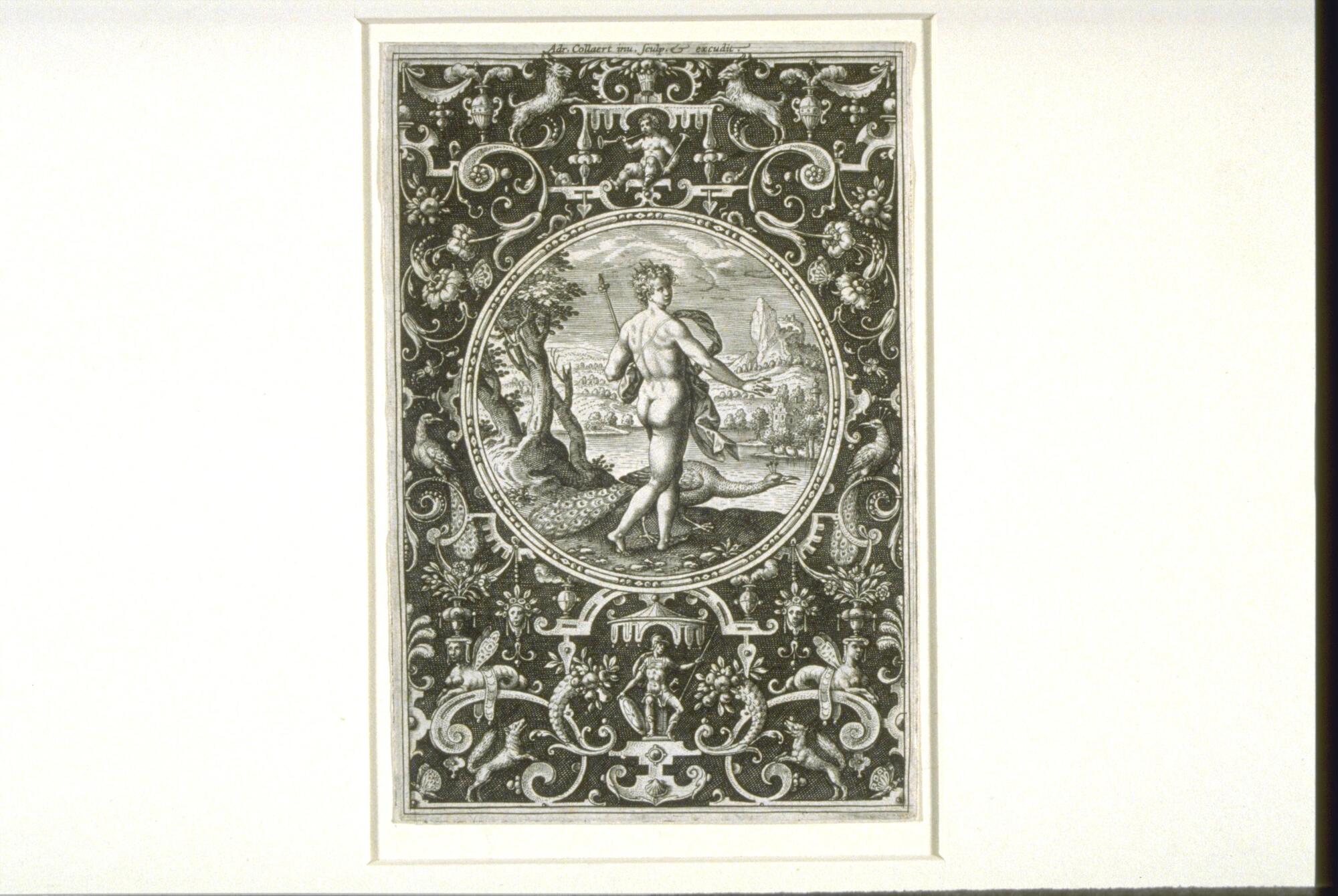 Title
Mythological Figures from the Judgment of Paris: Juno, no. 1 out of a series of

Label copy
Gallery Rotation Spring/Summer 2012
Adriaen Collaert
Flanders, circa 1560–1618
Juno, no. 1, from Mythological Figures from the Judgment of Paris
1560–1618
Engraving
Museum purchase, 1960/2.32
Collaert often included grotesque borders in his works, framing his compositions with an intricate design of flowers, decorative scrollwork, and mythological figures. Here, the artist depicts the goddess Juno (Hera) alongside a peacock, her sacred, symbolic animal. The border is an integral part of the composition, repeating the motif of the peacock and including additional gods and mythological creatures, such as sphinxes.
This print was one of a series that showed the main figures in the Judgment of Paris. In this story, Eris, the goddess of Discord, angry at being the only god not invited to an important marriage celebration, retaliates by throwing into the banquet hall a golden apple inscribed with the phrase, “For the Fairest.” This sets off a frenzy of competition among the female guests. The choice is narrowed down to Juno, Pallas Athena (Minerva), and Venus, but Jupiter (Zeus) refuses to decide, commanding the mortal prince Paris to do so instead. All three goddesses attempt to bribe the young man, but he gives the golden apple to Venus, setting off a chain of events that leads to the Trojan War.

Subject matter
This engraving is one of a series depicting the figures from the Judgment of Paris. The goddess shown here is Juno (or Hera), with scepter and crown and accompanied by the animal closely associated with her, the peacock. Juno was one of three goddesses competing to be declared the fairest by the mortal judging the contest, Paris. Venus won the golden apple given as a prize, triggering the sequence of events that led to the Trojan War.

Physical Description
A dark, densely figured decorative background surrounds a central round space containing a nude woman holding a staff before an expansive landscape. At her feet is a striding peacock.